Claiming your boyfriend as a dependent

One of the most popular tax questions every filing season is "Can I claim my boyfriend as a dependent?"

OK, in the interest of gender fairness and not portraying just boyfriends as layabouts, an Internet search shows that there also are a lot of filers wondering about the possibility of claiming girlfriends as tax dependents, too.

The answer to each romantic relationship tax query is "Maybe."

Who's a tax dependent? There are two ways a person can be a dependent on your tax return. The individual has to be a qualifying child or a qualifying relative.

That relative requirement obviously eliminates the possibility of a girlfriend or boyfriend being claimed as a dependent, right? Not necessarily.

That's because we get to use the Internal Revenue Service's always intriguing dictionary. (Remember its first-time homebuyer terminology?) 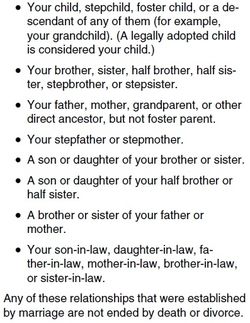 For tax purposes, a relative includes a wide variety of persons related to you by birth, marriage or other legal decree. The full list directly from the IRS is at right (click image for a larger view).

But the IRS also considers nonrelated people as qualifying relatives as long as they meet four other tests.

The person you want to claim as a dependent:

As long as the nonrelated person meets these criteria, he or she usually can be a qualifying relative and claimed as a dependent on your tax return.

Your actual relatives also must meet tests 1, 2 and 3. But they don't have to live under your roof.

This residency exception is why you might be able to claim an aging parent -- there is no age limit, either upper or lower, for a qualifying relative -- who lives in a seniors-only community as a dependent.

Additional criteria: In addition to the four qualifying relative tests, a person must be a U.S. citizen, U.S. resident alien, U.S. national, or a resident of Canada or Mexico for part of the year.

The person also cannot be claimed as a dependent by another taxpayer.

So if your boyfriend or girlfriend or just a platonic buddy bunked at your place for a full calendar year, didn't make much money and relied on you for more than half of his or her support (likely, considering the income limit) during that time, then you can claim that person on your taxes.

A few more caveats: Since this is the tax code we're talking about, there are a few more things to keep in mind.

The person living with you must be single. If this is your boyfriend or girlfriend, that shouldn't be an issue. If it is, you've got things other than taxes to discuss.

If another taxpayer can claim your sweetheart (or any other person you want to claim) as a dependent, then you can't take the tax break. That's true even if the other taxpayers don't exercise the dependency option on their own returns.

And if your relationship is prohibited by state law -- yes, there are still some places <cough, Florida, cough> where it's illegal for nonmarried persons of the opposite sex to live in the same house -- then the IRS is going to disallow the dependency claim.

You can find more details and examples of various dependent situations in IRS Publication 501. Or you can use the IRS' Interactive Tax Assistant to determine who you can claim as a dependent. And The TurboTax Blog has an infographic depicting dependent claims situations and rules.

No spousal dependents: You also probably noticed that "husband" and "wife" aren't included on the list of qualifying relatives. This, too, is a regular tax filing dependency claim question.

No, you can't claim your spouse as a dependent. But don't worry. You'll get your tax break.

If you file a joint return, you each get to claim your own personal exemption amount, which is the same as the dependent exemption, or $3,700 on 2011 returns.

Mike, Thanks for the clarification. Kay

I never knew that you can claim your boyfriend or girlfriend as a dependent. Very useful information!

It's not quite true that the GF/BF must be single - as long as the individual is not filing a joint return with the estranged spouse the dependency exemption is still allowed. Of course, in many places that type of living arrangement still violates local law.