What are doing with your tax refund?

OK, a tax refund is not nearly as big as today's Mega Millions lottery payout, which has now grown to $640 million. 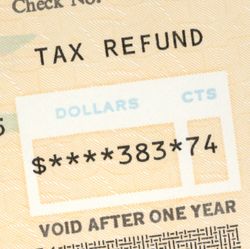 But getting some tax cash back from Uncle Sam is a welcome annual ritual for many folks.

Yes, the standard spiel now, which I've given myself over the years, is that you should adjust your withholding so you don't give the federal government a year-long interest free loan of your money.

The reality is, though, that a whole lot of people like to use over-withholding as a forced savings account.

And with interest rates so low on low-risk savings options such as certificates of deposit, they're not missing out on much by waiting until tax filing time to get their money.

As I mentioned a couple of weeks ago, the Internal Revenue Service hasn't been issuing weekly updates this filing season of how things are going since they haven't been going so well.

However, at a recent hearing before the Ways and Means Oversight Subcommittee, IRS Commissioner Douglas Shulman did provide some statistics as of March 10:

Plans for tax refunds: OK, so folks are getting a refund check of around three grand. Not too shabby.

What are they going to do with your tax refund?

Capital One Bank's annual Taxes and Savings Survey found that for the second year in a row, a third (33 percent) of Americans plan to spend all or part of their refund.

For those planning to spend their tax cash, everyday expenses topped the shopping list:

More than a quarter of respondents, 27 percent, said they plan to save at least part of the money they get back from Uncle Sam. Another 17 percent intend to pay down debt. And 5 percent said they will invest their tax refunds.

However, almost seven in ten, 69 percent, of Americans said they don't calculate their tax refund or tax payment into their annual budget.

"A tax refund is often seen as free money, which makes it very tempting to spend it right away," said Mickey Konson, managing vice president for retail banking at Capital One Bank. "But it's important to remember that the refund you're getting back is your own money. Tax season is a good opportunity for people to plan ahead, with an eye toward their future goals and financial health."

Did or will you get a refund? If so, what are your plans for your tax money?