There's always talk of revamping the tax code, especially in a presidential election year. But it's going to take some heavy equipment to make any substantive structural changes since the U.S. tax code is huge and keeps growing.

How big is it?

It's hard to reach a consensus on the exact size of the Internal Revenue Code, but lots of folks have tried. Most notably, Congressional speeches over the years have offered various ways to visualize the enormity of the tax code:

The one description that most folks, on and off Capitol Hill, can agree on is that "the tax code is a complicated mess."

If you want to count the words yourself, you can find links at the IRS' online Tax Code, Regulations and Official Guidance page.

Personally, I prefer the annual overview from tax software and publishing company CCH of the number of pages in its Standard Federal Tax Reporter. This book includes the Title 26 language, as well as explanations of the tax laws and associated regulations.

As you can see from the colorful graphic below, federal tax laws and the information necessary to interpret and comply with them keep piling up. 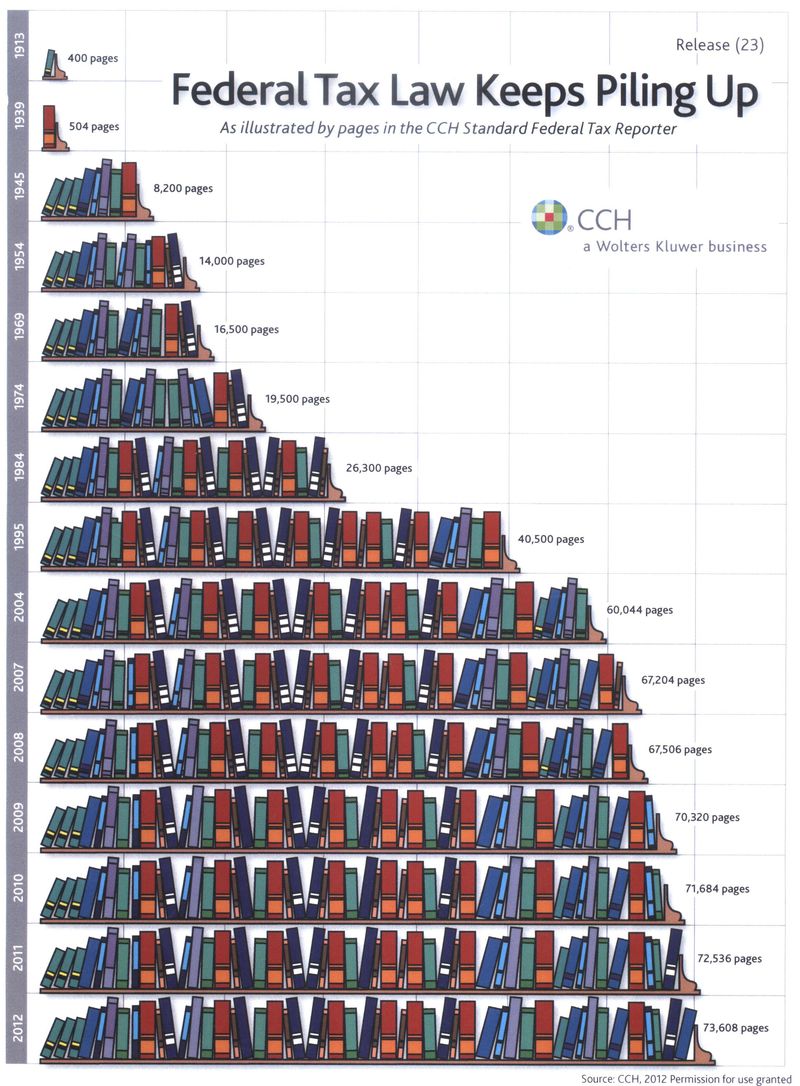 This illustration, of course, feeds the frenzy to revamp or scrap and replace the current tax code.

But before we even get to that place -- which is a long, long way down the road -- I'd like to try another approach. Make Congress leave the tax code alone for a while.

It's the constant tinkering by Representatives and Senators that causes the most tax trouble. At a Ways and Means hearing on tax reform last year, committee chairman Dave Camp (R-Mich.) noted that there were nearly 4,500 tax law changes in the last decade.

Worse, lawmakers' alterations usually are done in the most arcane ways to meet desired budget numbers or political philosophies or the wishes of major campaign contributors.

And all too often these changes are retroactive so we taxpayers and our tax and financial advisers have no way to effectively plan.

So give it a rest, guys and gals, and let's see exactly what we have, unintended consequences included.

Then we can look at where we really need to make some tax code changes.

I once read it was 5,000 pages, but can't for the life of me find that cite. As for the War and Peace reference, I'm sure the Member of Congress had never picked up, much less read that book. It was just a good sound bite! Kay@What?MeCynical?!