In Georgia, Louisiana and North Carolina, food sales are subject to local taxes.

I understand that everyone eats, except for maybe the stray super model. That makes tacking a few cents onto a grocery bill an appetizing way for states and local governments to get much-needed money.

But precisely because everyone must eat to live, taxing such a necessity just doesn't seem right to me.

Food or not? Plus, the determination of what is "food" and what isn't for tax purposes can drive shoppers, store owners and tax collectors to drink.

Utah, for example, has a lengthy food tax flow chart to walk retailers through the various edibles' tax/no-tax possibilities.

Even in Wyoming, a state that doesn't have a food tax per se, sellers have to follow a similar elaborate recipe to make sure they are clear as to what is or isn't food for tax purposes.

At least, according to the Federation of Tax Administrators, the sales tax rate on foodstuffs in several states is lower than the general sales tax rate.

And some states allow a rebate or income tax credit to compensate lower-income households for the taxes they paid on groceries. That's the case in Hawaii, Idaho, Kansas, Oklahoma and South Dakota. 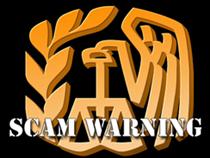 Food tax scam: But now I learn about something that's more distressing than taxing food.

Tax con artists are using food taxes to entice unsuspecting victims and take even more of their money.

This is a variation of the American Opportunity education tax credit scam I blogged about last week.

These creative crooks are still targeting the elderly and poorer families. And they're still using the real education tax break for their nefarious purposes.

Apparently when someone expresses skepticism about the fake tax claim because they didn't go to college or aren't paying for anyone else's schooling, the con artists tell their potential victims that it's OK to claim the college credit because it's also available to compensate them for paying taxes on groceries.

Really? An education tax break that offsets state and local taxes on groceries? Why? Because you sent your favorite student care packages full of munchable goodies?

In noting this variation of the education tax credit scheme, the IRS doesn't elaborate so we're just left to speculate on the scam specifics.

But obviously enough creeps crooks con men scam artists creeps are out there using it, and with some success, or the tax agency wouldn't have spread the warning.

So I join Uncle Sam in encouraging you to be dubious about any unusual ways to cut your tax bill or get a bigger refund, especially when they are suggested by someone you don't know.

At tax time, it's usually the case that if it sounds too good to be true, then it isn't true. And it could cost you.