Alcatraz Island was home to the first lighthouse on the West Coast. That beacon is still there, but The Rock also housed military installations, was the birthplace of the American Indian Red Power movement and remains a bird sanctuary. 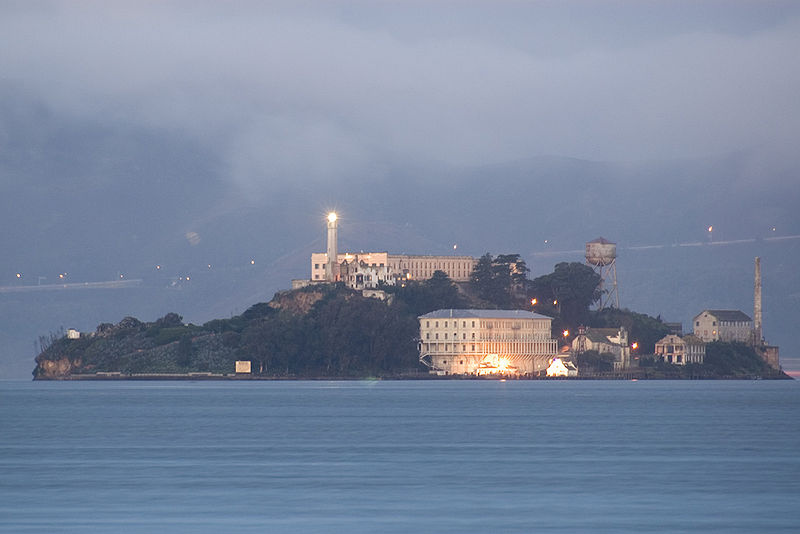 Alcatraz Island at dawn via Wikimedia

But most of us know Alcatraz for one thing, its infamous penitentiary.

The facility could hold more than 300 prisoners and thanks to Hollywood everyone knows about Robert Stroud, the Birdman of Alcatraz.

George "Machine Gun" Kelly occupied an Alcatraz cell between 1934 and 1951. Fellow gangster Alvin "Creepy" Karpis was incarcerated there from August 1936 to April 1962, longer than any other prisoner.

But the felon who caught my attention was known as #85 while in Alcatraz: Alphonse Capone.

Yep, the Chicago mob boss whom The Untouchables brought down not for his alleged murders and other criminal enterprises but because he didn't pay taxes on his illegally earned income, spent 4½ years (1934-1938) on The Rock.

Other famous tax scofflaws: To commemorate the day 49 years ago that Alcatraz ended its time as home to some of America's worst convicts, today's post notes some other famous criminals.

And, as you expected, because this is a tax blog they all did some jail time because of their tax filing transgressions (thanks to Naked Law for the research).

Johnny Be Goode in jail: Rock legend Chuck Berry pleaded guilty to tax evasion in 1979 for willfully falsifying income information on a tax return. Berry spent four months in jail and then performed 1,000 hours of community service. Thank goodness for Berry, the added hours were via benefit concerts.

Tax strikeout: Pete Rose, Major League Baseball's all-time hits leader (4,256), "forgot" to claim income from autograph and memorabilia shows. After pleading guilty in 1990 to two charges of filing false income tax returns, he was ordered to pay $366,000 in back taxes, fined $50,000 and sentenced to five months in a medium-security prison camp in Illinois.

Tougher than vampires: Action film star Wesley Snipes found the Internal Revenue Service a much tougher foe than the Hollywood vampires he battled in the Blade movie series. Snipes was indicted in 2006 on several counts of tax evasion, including failure to file tax returns and filing false returns. He was acquitted in 2008 of the most serious charges, but found guilty of three misdemeanor counts of failing to file a tax return. After many appeals, including an attempt to get the Supreme Court to hear his case (it refused), Snipes reported to a federal prison in Pennsylvania in December 2010 to begin his three-year sentence.

Put some clothes on, man! Richard Hatch, the first winner of the long-running Survivor reality television show/contest, still swears that CBS told him it would take care of the taxes due on the $1 million he won in 2000. That argument never convinced a jury, judges or the tax-knowledgeable public and Hatch was convicted of tax evasion. Hatch, known during that inaugural season as the "fat naked guy," began serving his 51-month federal prison sentence in May 2006. After a series of house arrest, supervised releases and reincarcerations, jailers finally had enough and kicked Hatch out for good in December 2011.

Ciao tax collector, jail cell: Italian sex symbol Sophia Loren was convicted of tax evasion charges in 1982 and served 17 days of a 30-day sentence in a Naples, Italy, jail. The screen legend filed a petition for pardon, saying her accountants had made an error. Loren said the tax evasion charges were the result of a $7,000 discrepancy on a 1970 tax return. Like many other wealthy Europeans, Loren eventually established residency in the tax haven Switzerland.

Lots of other celebrities have had run-ins with the tax collector, at federal, state and local levels. But they didn't end up locked away. You can check some of them out under the ol' blog's "celebrity" tag (this post will appear first, so just scroll down a bit; and note that not every entry there is about alleged tax cheats).

Do you know of any other famous folk who actually saw the inside of a cell because of taxes? Please dish by leaving a comment below.

It's hard for me to believe that people can justify not paying their taxes. We live in a country where we are truly free and opportunities abound. Doesn't the government, and the people of America, deserve to have benefits and taxes paid? We're in this country together - so let's all just pay our taxes shall we?

Thanks for a very interesting, historically captivating article.