It's a good thing that we Texans don't have to pay a state income tax. Think of how much we'd be shelling out with that on top of the estimated $400,000 a month we're fronting our governor in his fruitless bid for the Republican presidential nomination.

That's right, pardners. Regardless of whether you voted for Rick Perry to head our state or support his apparently futile bid to be the GOP opponent of President Obama next November, all Texans are paying for Perry's political forays via his security detail.

The Texas Tribune's examination of public records show that the Texas Department of Public Safety spending on out-of-state travel has skyrocketed since Perry began crisscrossing the nation in pursuit of the Republican nomination.

Online reports from Comptroller Susan Combs show that the public safety department has spent more on out-of-state trips from September to mid-December of this year — more than $1.4 million — than it did in the entire 2011 fiscal year, when it spent $1.1 million.

The public safety department said last week that the governor’s security for out-of-state trips cost $486,904 in fiscal year 2011. A department spreadsheet shows that the agency spent more than $397,000 to protect the governor on trips in a single month, between Sept. 5 and Sept. 28 this year.

The Texas governor, however, says he's doing this not for his political future, but for our great state.

It's "appropriate" for the state's public safety department to pay for his security, he says, because Texans would benefit from his travels. 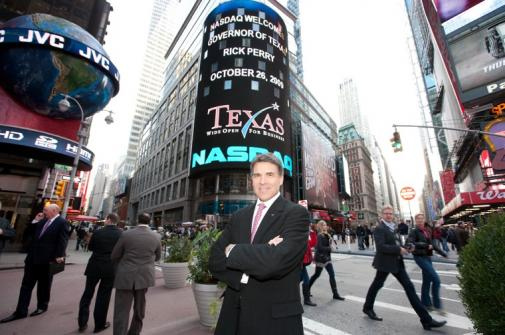 "I'm going to be promoting Texas," the Tribune reported Perry saying back in July when he began his GOP nomination bid and started venturing beyond the state's borders. "I'm going to be traveling to places where the Texas story needs to be told, and we will tell it."

Do as he says, not as he does: Many of us think Perry should check out his campaign propaganda.

As I recall, he's given lots of speeches about self-sufficiency and less government spending. And he constantly talks about keeping the government out of our lives and pockets.

But the state legislature this last session took that message to heart locally when it cut state funds for all sorts of social programs and Texas school districts.

It seems that what Perry really means is that he's for less spending on projects Texas citizens want, but not for less state spending on his own goals.

Perhaps the gov will rethink his use of Texas money for campaign security when he realizes that it puts him squarely in league with the man he would like a chance to unseat.

Perry is the only 2012 presidential candidate, other than Obama, whose security is funded by taxpayers.