While Congress is gridlocked -- and possibly heading toward another government shutdown -- over how to keep the 4.2 percent payroll tax rate in place, lawmakers might want to spend some of their free time reading the latest Associated Press-GfK-Roper public opinion poll.

That survey, conducted late last week, found that 58 percent of Americans want to keep getting the extra money that the payroll tax cut has provided them this year.

The survey respondents answered "yes" even though the poll pointed out that the result could add to the federal deficit.

So maybe politicians might want to rethink their emphasis on America's debt, at least when it comes to legislation where people can directly and immediately see the impact in their pocketbooks.

And I wonder if the numbers would have changed any if the pollsters had noted that the payroll tax cut also could weaken the Social Security program?

The group of folks who answered this round of questions also have shifted more toward cutting federal programs instead of raising taxes. During the debt ceiling debate this summer, folks tended to opt for a combination of spending cuts and tax hikes.

But when asked a few days ago, "In order to balance the federal budget, which should be the main focus of lawmakers?" they said: 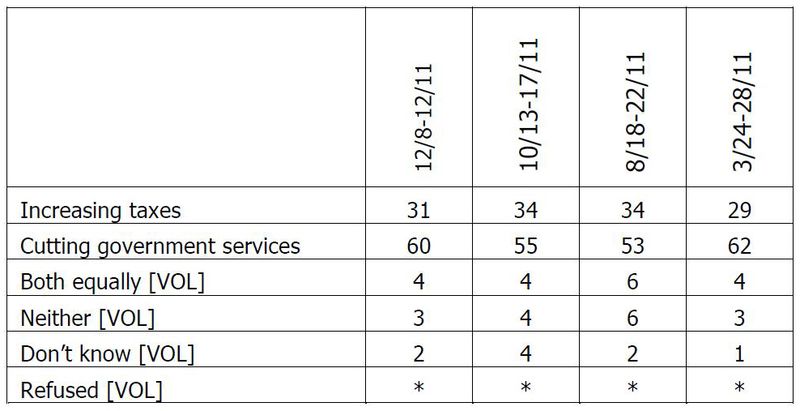 Whatever the reason, the move, however slight, toward reducing government services instead of raising taxes is certain to give Representatives, Senators and those who want to join the ranks on Capitol Hill more ammunition not only for legislative battles in Washington, D.C., but also on the 2012 campaign trail.

There is a big difference in the premise of the question in that the August poll related to using tax hikes or spending cuts to pay for defecit reduction. The most recent poll asks how the payroll tax holiday would be funded. Most interesting is the first survey in which which 35-42 percent support letting the payroll tax holiday expire. Significantly, these are people who, by and large, benefit from the tax cut. Taken together, 30+% consistantly oppose raising taxes on the "1%" yet 35-42% support letting taxes go up on themselves rather than add to the defecit.