Miami Marlins new taxpayer funded stadium on schedule, but will it pay off?

Winter's just arriving in Austin, so of course I'm thinking spring and baseball.

Actually, the baseball musings started last month when the hubby and I headed to South Florida for a combined business (for me) and mini vacation (for us) trip.

We were in Miami for a day and drove past the under construction Miami (formerly Florida) Marlins stadium. 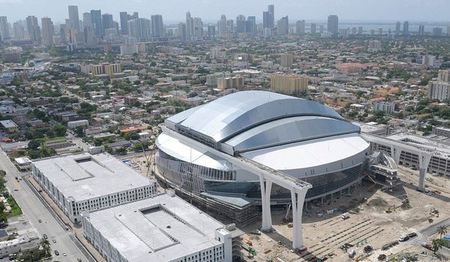 Just in case you had the same question I had about those "roads" sticking out from the building, no they're not for fans to leap from after particularly bad games. They are supports for the roof when it's rolled back for the one or two open air games a season the South Florida weather will allow.

I really hope this new building works out for the Marlins, and by that I mean that fans will finally attend the games.

Despite the on-field success of Florida baseball teams, I still believe the state should spend its money on strengthening its Grapefruit League.

I know that spring training is only for a couple of months, but you have more teams down there and lots of out-of-state visitors who come in to see them. And they go beyond the minor league facilities to spend their money.

The MLB Rays in Tampa and relocating Marlins, however, have always had a hard time filling their ballparks, even in their glory days.

But Florida and baseball execs didn't consult me. Instead, they decided to spend taxpayer money on the new Miami structure.

A feature in today's New York Times notes that the Marlins got Florida taxpayers to finance about three-quarters of the stadium's cost, but that the team will pocket the concessions, suites, naming rights and other revenue.

Yep, come April 2012, Ozzie Guillen better get those guys on the winning track and fast.

The newspaper also reports that the city of Miami and Miami-Dade County officials are "squabbling over who if anyone should pay property tax on the stadium's four parking lots."

Then there's the political fallout. Again from the Times:

"The stadium itself, which towers over the Little Havana neighborhood, remains something of a political third rail. In March, the county's mayor, Carlos Alvarez, overwhelmingly lost a recall vote partly because he supported public financing for the facility. And on Friday, The Miami Herald reported that the U.S. United States Securities and Exchange Commission subpoenaed records from Miami-Dade County and Miami over the deal to build the ballpark, including financial information backing almost $500 million in bond sales."

So it's no surprise that a lot of Floridians, one of the places hardest hit economically by the housing industry crash, aren't thrilled with the deal.

Carlos A. Gimenez was a very vocal opponent of the deal under which Miami and the county issued bonds backed by a hotel bed tax and parking fees to cover about three-quarters of the new stadium's estimated $645 million cost.

Now Gimenez is the new mayor of Miami-Dade County, with an office that overlooks the stadium, and he's acutely aware of the lingering ill will about the deal.

"People are having a hard time balancing their books and don't like giving away money to people capable of helping themselves," Gimenez said.

I'm sure he and other Floridians, baseball fans or not, will be watching the team and its new digs very closely this coming season.

The owners of the Miami Marlins are the very same types that tout free-markets, capitalism, and small government; but ironically, they are the very first ones to get in line to accept their Government handout and to wallow at the tax-dollar filled trough.