We got our Christmas tree up last weekend. Congress now is working on its own traditional holiday symbol.

I'm not talking about the National Christmas Tree, which is just outside the White House grounds and which was illuminated by the President and Mrs. Obama on Dec. 1. 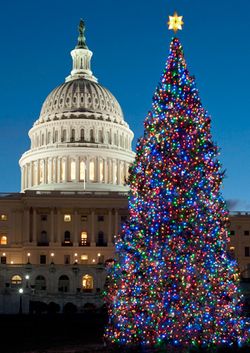 Neither am I referring to the Capitol Christmas Tree on the building's West Lawn. House Speaker John Boehner  (R-Ohio) lit that fir up on Dec. 6.

This particular Christmas tree is metaphorical.

It's the description given every year to attempts by lawmakers to wrap up outstanding measures in one bill before they leave town.

Here's the definition from Lexis Nexis:

Christmas tree legislation -- Any bill "adorned" like a Christmas tree with unrelated amendments. Generally occurs when the Senate takes up a relatively minor House-passed bill and "trims" it with any number of non-germane amendments. Frequently occurs at the end of a Congress, but recently supplanted by omnibus reconciliation legislation.

Christmas tree bill -- Informal nomenclature for a bill on the Senate floor that attracts many, often unrelated, floor amendments. The amendments which adorn the bill may provide special benefits to various groups or interests.

Deck the halls of Congress: In December 2011, the Christmas tree is the bill to extend the payroll tax cut.

Until Dec. 31, the amount of money coming our of workers' checks for Social Security taxes is 4.2 percent. Unless Congress acts, on Jan. 1, 2012, the payroll tax rate will go back up to 6.2 percent.

The Middle Class Tax Relief and Job Creation Act of 2011, finalized Friday by House Republicans, would keep the tax rate at 4.2 percent. But it also has a lot of ornaments that aren't related to the payroll tax.

And all the shiny provisions in the 369-page bill will add $25.3 billion to the federal deficit over the next 10 years, according to the Congressional Budget Office.

The Congressional budgeters acknowledged that the bill contains lower caps on discretionary-spending ceilings than were agreed to in the debt-ceiling deal passed this summer. That could reduce the deficit by $1 billion.

However, the CBO said it cannot include those assumptions in its official score because they are subject to the enactment of future legislation.

What's on the "tree" or not: One way to pay for the added payroll tax cut is missing from the GOP bill. It doesn't include the surtax on millionaires that Democrats want.

But other decorations could get support from both sides, such as changes to federal retiree benefits, additional fees for Fannie Mae and Freddie Mac and two other time-sensitive issues, Medicare payments to doctors and extension of unemployment insurance benefits.

Like the payroll tax cut, the laws affecting the Medicare and unemployment payments expire Jan. 1, 2012.

Financial aid to the jobless is huge issue entering an election year in which jobs, or the lack of them, will be a major political point.

The GOP bill would gradually reduce the length of time that unemployment benefits can be claimed from 99 weeks to 59 weeks in a two-step process. It also would let states require drug testing as a condition of receiving the payments.

The Republican bill also would:

Controversial ornament: And oh yeah, the bill's first provision would force the Obama Administration to fast-track a permit decision on the Keystone XL oil sands pipeline.

The president has delayed the pipeline decision until after the 2012 election. The GOP says the project will create thousands of jobs and wants work to begin ASAP.

Obama has specifically said he will not sign a bill with any Keystone measures. In fact, the president went further, saying he would not accept a payroll tax bill to which Republicans add "extraneous" provisions.

But the first step comes next week, when the GOP will try to get the lights lit on this year's Christmas tree bill.

Capitol Christmas Tree photo
courtesy of Architect of the Capitol