The House is debating extension of the payroll tax cut.

We can argue it's about process.

But there's no argument that it's about politics.

Both Republicans and Democrats in Congress, looking at public opinion polls that rate them as the worst lawmakers ever, are looking for any edge.

The House GOP is arguing that it's irresponsible to OK a short-term bill. Point taken.

But how many of these Representatives have voted for the innumerable short-term -- and retroactively enacted -- bills that were just as inconvenient and uncertain?

Is this the time or the issue upon which to draw the line in the sand?

I don't think so.

It's an attempt by House Speaker John Boehner (R-Ohio) to save his leadership job. He's been under fire from day one from the more conservative elements in his party, led by Rep. Eric Cantor (R-Va.). When Cantor says jump, as he did in the GOP conference call following the Senate vote on Saturday, Boehner says how high?

Will Boehner's position on the payroll tax cut (and the extension of unemployment benefits and the Medicare doctor's payment fix) help him keep the House Speaker job? Perhaps, but only if the Republicans retain control of the House.

Will they? Or will the Democrats be able to use this issue as a campaign tool to regain seats and House control?

We won't know the political winners and losers until for sure until Nov. 6, 2012.

But it's obvious that right now taxpayers who are counting on the added payroll tax cut income or unemployment benefits, as well as seniors on Medicare who need medical treatment after Jan. 1, 2012, are the losers.

And why they are losing their much-needed government support is unclear, and immaterial, to many of them.

The most infuriating and despicable aspect of this whole Capitol Hill charade is that Senators and Republicans apparently have let partisan bickering and political exigencies blind them to their responsibilities to and needs of the American public.

So what's the fight about? The House Ways and Means Committee, chaired by Rep. Dave Camp (R-Mich.), has issued a side-by-side table of the GOP bill and Senate compromise. 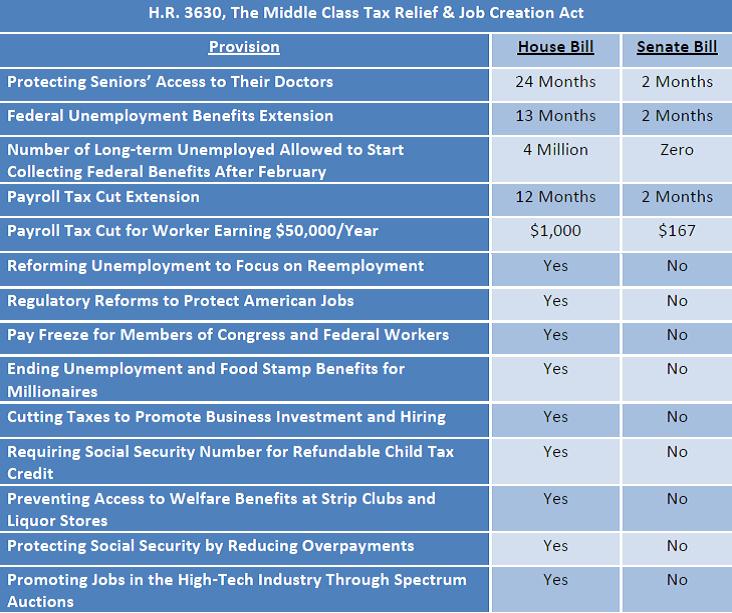 The Washington Post also put together a comparison of the measures, a snippet of which it show below. 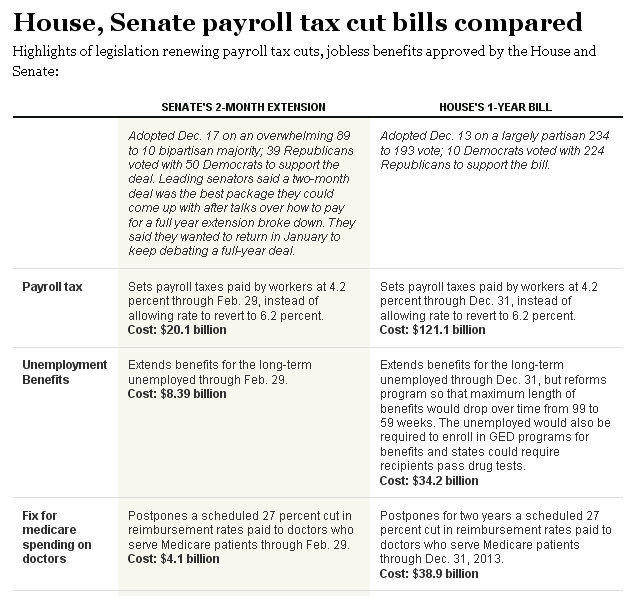 So why not cut ALL payroll taxes until we reach full employment? If a little "added payroll tax gut income" is good, then a lot must be great, right? Social Security still has plenty of surplus, so it's just like more stimulus! We'll just need to raise the debt limit another $2.5T to make room for moving the SSA bonds to regular T-bonds; and then we'll have to triple the payroll tax and remove all caps, slash benefits, and raise eligibility age to keep it solvent, but that would be like, three years from now. That's TWO elections! That's forever!