The economy was just starting to recover in 2010, but more people felt confident enough to bump up their charitable contributions.

Total charitable contributions from individuals, corporations and foundations were an estimated $290.89 billion in 2010, according to the 2011 annual report on philanthropy by Giving USA Foundation and its research partner, the Center on Philanthropy at Indiana University.

The 2010 estimate represents growth of 3.8 percent in current dollars and 2.1 percent in inflation-adjusted dollars.

That uptick was good news for nonprofits, reversing the downward trends of the two previous years. Giving USA says that 2008 and 2009 saw the largest drops in giving in more than 40 years, in large part because of the recession.

"Despite the fragile economic recovery, though, Americans continued -- and even increased -- their support of organizations and causes that matter to them in 2010," said Edith H. Falk, chair of Giving USA Foundation, in a statement accompanying the 2011 report's release.

"The $10.59 billion increase in the estimated total suggests that giving is beginning to recover as the economy slowly climbs out of the recession," said Falk.

Who got the money: Gifts to religious groups continued as the top destination of charitable gifts, totaling an estimated $101 billion in 2010. That amount was 35 percent of all donations. 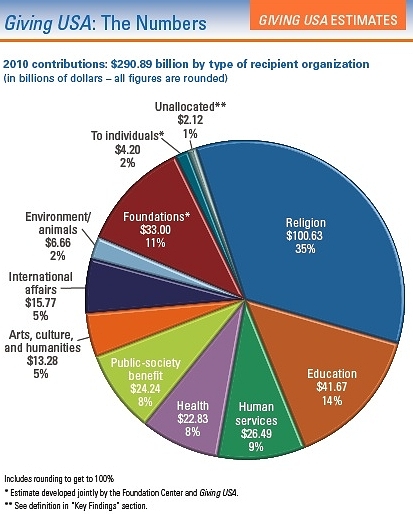 Donations to human services in 2010 came to an estimated $26.49 billion, an increase of 0.1 percent in current dollars but a decrease of 1.5 percent in inflation-adjusted dollars. Human services includes the majority of the $1.43 billion donated to Haiti disaster relief.

Who gave the money? Charitable gifts by individuals rose an estimated 2.7 percent in 2010, to $211.77 billion. That was a 1.1 percent increase in inflation-adjusted dollars.

Giving USA also included here an estimate for "mega-gifts," which it describes as gifts large enough to move the percentage change of total giving by one percent from one year to the next.

Corporate giving rose to an estimated $15.29 billion, up 10.6 percent in current dollars or 8.8 percent in inflation-adjusted dollars.

And even though there was no estate tax in 2010 and therefor no tax reason for beuqests to charities, Giving USA says that an estimated $22.83 billion was donated from this group.

Presumably, saus Giving USA, many folks didn't make changes in their estate plans after the tax was repealed for that on year.

Still time to donate: While the 2010 charitable figures are set, there's still time to give and make a difference to your 2011 tax bill.

Of course, to get any tax benefit, you must follow the IRS donation rules. One of them is to get your gift to your favorite charity by Dec. 31.

So if you're planning to donate household items or clothing, start getting that together now.

If you want to give cash, this includes not just currency, but also contributions by check and credit card.

And donations by plastic allow you to wait until the very last minute. If the gift to the charity is charged by Dec. 31, you can count it as a donation this year even though you'll pay the credit card bill with the donation in 2012.