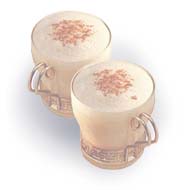 I like the drink plain, but many folks consume it only after it's been spiked with plenty of rum, bourbon, brandy or other alcoholic beverage.

The dairy industry obviously is celebrating today since the traditional eggnog recipe calls for plenty of eggs, milk and cream.

That recipe also calls for bourbon.

KitchenProject.com cites spiced ale or wine as the potent potable used in this holiday beverage, first mentioned in early 17th century toasts to one's health. Punchbowl.com says that Germans tend to use beer in their 'nog.

It's that inclusion of various alcoholic drinks that gets the distilled spirits industry, and beer makers if you go for ale or some other hops and yeast concoction in your 'nog, fully behind today's holiday.

Beer, wine and distilled spirits taxes: Uncle Sam and state tax collectors also are raising a glass of eggnog today since they get excise taxes on all the booze added to the eggy punch.

The federal government generally levies an excise tax of $18 per barrel on beer, which comes to around .05 cents per 12-ounce can.

The various U.S. tax rates on wine range from $1.07 per gallon on vintages with 14 percent or less alcohol to $0.226 per gallon on hard cider.

And distilled spirits makers face a federal excise tax of $13.50 (less any credit for wine and flavor content) on each proof gallon of hard liquor.

At the lower governmental levels, the states' excise taxes on alcohol, beer and wine vary as widely as the jurisdictions and products.

Rates updated in February 2010 by the Tax Foundation show that buyers of liquor will pay the largest state tax in Washington, which collects $26.45 per gallon.

The highest wine tax is $2.50 per gallon in Alaska.

Make your own: Just as you can use whatever alcoholic additive you wish to your milky beverage, you can choose from a variety of 'nogs.

Store shelves offer a choice of premixed eggnogs, including plain, organic, booze-added, low-fat and soy or other milk substitute versions.

If, however, you're a drink do-it-yourselfer, Cdkitchen.com has recipes for more than two dozen make-from-scratch eggnogs.

They range from traditional holiday/Christmas 'nogs to fruit flavored ones to diabetic versions to, for you urbane types, a pair of eggnog martini recipes.

To each his or her own favorite eggnog and alcoholic additive.