Wow! The failure of the Joint Select Committee on Deficit Reduction did accomplish one amazing thing. 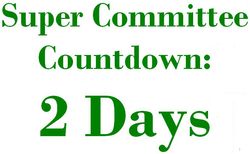 It got New Gingrich, former GOP Speaker of the House and current front runner for the Republican presidential nomination, and Democrat Barney Frank, the unabashedly liberal Representative from Massachusetts, to agree that the super committee's inability to agree on a plan could be a good thing.

Gingrich, who already had made it clear he didn't like the super committee, calls its collapse good for America. Frank is a bit narrower in his assessment, characterizing the panel's failure as good news for Democrats.

Still, I suspect this is as close as these two guys have ever been to agreeing about anything. I'll give you a minute to let that odd couple's philosophical convergence sink in.

So where do we go from here, with each side starting from very far apart positions?

Back to Simpson-Bowles: Sen. Joe Manchin (D-W.Va.) says it's time to reconsider another special committee's proposals.

Appearing on CBS' Face the Nation, the is past weekend, Manchin argued for immediate consideration of proposals formulated last year by the National Commission on Fiscal Responsibility and Reform.

This bipartisan group, selected by Obama to come up with deficit and tax reform ideas, is usually known at the Simpson-Bowles commission (or Bowles-Simpson by those prefer to list the Democrat first), named after the two cochairs, former GOP Senator from Wyoming Alan Simpson and former Bill Clinton chief of staff Erskine Bowles.

The two cochairs issued their draft proposal last November, but that full committee also was unable to come to an agreement on the proposals.

Still, some Simpson-Bowles ideas have fans. Sen. Pat Toomey (R-Pa.) included part of that earlier panel's measures in the tax/deficit reduction proposal he presented to his super committee colleagues.

Manchin also is a supporter and says it's time to consider that presidentially appointed commission's ideas.

"We have a plan that's been tested," Manchin said of Simpson-Bowles during his Sunday morning television talk show appearance. "It's been bipartisan from its inception. It stayed bipartisan and it grew. The gang of six morphed out of that. 140 of us now are standing as tall as we can. We want them to be bold and go big."

But acknowledging the possibility that the super committee might fail, Manchin told program host Bob Schieffer, "just think what would happen if we step forward if they don't come to an agreement, we step forward as a group and we're saying we're going to put this on the table and vote for it. We need leadership. We need leadership from the White House to both the House and the Senate stepping forward and embracing this plan."

Petitioning the president, Congress: Once he got back to his office Monday, the freshman Senator from The Mountain State sent a letter to Obama and Congressional leaders urging them to allow a full vote on Simpson-Bowles.

"In the year that I have been in Washington, only the Bowles-Simpson proposal has generated bipartisan support in both houses of Congress. While the Bowles-Simpson framework may not be perfect, it is the only proposal I have seen that provides pro-growth tax reform and long-term entitlement reform, while cutting our national debt," Manchin wrote.

I appreciate the newbie enthusiasm of Sen. Manchin. But I doubt he'll get the Simpson-Bowles vote he wants.

Some the commission's ideas, however, could show up in other legislation next year.

Again, though, I suspect those bills won't go anywhere. They'll be introduced so that lawmakers can say "I tried" as they point the bills out to voters along the campaign trail.

But since this post has a connection, and since I created all the images for this series, I decided to use it anyway.

It also makes it easy when collecting them on one consolidated super committee countdown blog posts page.