Will super committee include farm bill provisions in its proposal?

In 2008, Congress passed a farm bill that is the framework for most federal farm and food policies through fiscal year 2012.

It also includes tax-related provisions to offset some new spending initiatives in the rest of the bill. 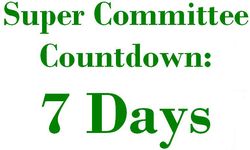 You'd think that all those ag subsidies would be prime cost cutting areas for the Joint Select Committee on Deficit Reduction.

However, the leaders of the House and Senate Agriculture Committees, who have been working on new farm legislation behind closed doors, want to have the new five-year farm bill added to any deficit reduction measure crafted by the super committee.

Farm bills foes oppose super committee action: The possibility that the farm bill will be added to a deficit measure fast-tracked for Congressional approval is not sitting well with farm bill foes.

They contend that the secret law-writing process coupled with moving the ag measure forward via the deficit panel is simply a way to circumvent hearings and shut down critics who view commodity subsidy programs as symbols of government waste.

By rolling the major agriculture measures into any super committee proposal likely means that federal payments to farmers will in fact be propped up for another five years.

Who's influencing who? In addition, others have raised concerns that super committee action on farm bill provisions could be influenced by big political donors from the agriculture industry.

MapLight, a nonprofit, nonpartisan research organization that tracks money in politics, has conducted an analysis of campaign contributions to members of the super committee from interests within the Agribusiness industry as defined by the Center for Responsive Politics.

Since Jan. 1, 2001, says MapLight, agriculture interest groups have contributed over $3.7 million to members of the deficit reduction panel.

The breakdown of the political donations to the 12 bipartisan super committee members is detailed in the table below:

Time vs. money: Will agricultural interests' money have more influence on the super committee than direct lobbying efforts by other groups?

Or will health care interests get more favorable attention since that industry's reps lead in the amount of time spent with members of the deficit panel?

Watching the calendar: I've gotten questions about my countdown of the deficit panel's plan deadline of Nov. 23. Why was Wednesday, some readers asked, Day 8 instead of Day 7 since it was exactly a week away?

Jokes about journalists and math aside, there is a reason that my count seems a day off to some folks. I have an apparent extra day because I count Nov. 23 itself.

Having worked on Capitol Hill and had end-of-year holidays ruined because Congress couldn't do its job until the very last possible moment, I suspect that's what it will do this time.

So since the Representatives and Senators can and probably will still be working on details of any deficit plan on Nov. 23, I count that as one of the countdown days.

And that means that today through next Wednesday is seven days, making this Day 7 left in the countdown to the deficit plan deadline.

Should be interesting to see how this all plays out. Altria has big hopes for its tobacco farms if things go its way, which would usually be the case.