The deficit reduction back-and-forth between Democrats and Republicans on the super committee continues.

This Veterans Day week, Democrats suggested that savings from ending the Iraq and Afghanistan wars be used to pay for a new stimulus package, according to The Hill. 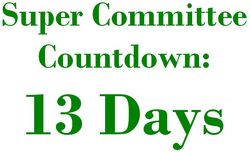 A summary of the $2.3 trillion plan obtained by the Capitol Hill newspaper includes $200 billion in defense cuts and slashes $200 billion from other discretionary spending.

Part of that savings, say the six Democrats on the Joint Select Committee on Deficit Reduction should go toward spending on infrastructure.

No taw rewrite specifics, however, were provided by the newspaper. I'm presuming that at this point the Democratic plan also was vague about what to do to our tax system.

Overall, the Democrats say their measure would generate $1 trillion in total revenue.

And so the countdown to Nov. 23 continues.

Thank you friend i find your blog very informative.