November has arrived, bringing with it just 23 days (counting today) for the specially created Congressional super committee to come up with a way to reduce the federal deficit by at least $1.2 trillion.

The other part of that task is developing a plan that appeals to most on Capitol Hill. If that doesn't happen, then automatic spending cuts that neither Republicans nor Democrats want will take effect.

Having worked in Washington for two decades and watched the proceedings from afar for longer than that, I'm certain that if a deal is struck -- and in this political climate, that possibility is definitely up in the air -- it won't be until the very last moment. 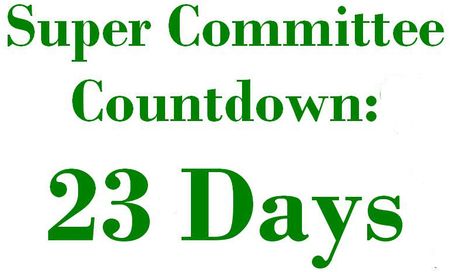 So that you can make your Thanksgiving plans accordingly, I'll post news on the Joint Select Committee on Deficit Reduction's progress each day until its Nov. 23 deadline arrives or the panel completes its work.

I look forward to seeing you here for the Nov. 23 report.

"In private conversations, and now in public, the idea of changing the social program as part of a deficit-reduction deal is gaining some traction -- a move that has been politically unthinkable for years," reports Politico.

House Speaker John Boehner (R-Ohio), who's not on the super committee but like his leadership colleagues on both sides of the aisle is "advising" the panel, said Monday that "nothing would send a more reassuring message to the markets than taking bipartisan steps to fix the structural problems in Medicare, Medicaid and Social Security" (The reference to the federal programs comes at 26 minutes into the linked C-SPAN video.)

Sen. Patty Murray (D-Wash.), co-chair of the panel, told Politico that while she wouldn't discuss specifics, "everything is on the table, and we’ve made no decisions."

As expected, that is not welcome news for some.

The AFL-CIO has launched a campaign to tell Congress that the proposals by both Republicans and Democrats on the super committee to slash Social Security, Medicare and Medicaid are "simply unacceptable."

And Reuters reports that three Republicans and three Democrats on the panel (the news service doesn't identify them by name or whether they are from the House or Senate) are looking at their own deficit-reduction deal.

There's also no detail on whether this splinter group is considering changes to Social Security and the related government benefits.

But the bipartisan alliance is significant because, according to Reuters, "at least two Republican members of the smaller group are willing to consider revenue increases as part of a deficit-reduction plan."

If that yes-to-taxes position holds, it could be crucial since it takes a simple majority of seven votes for the super committee to approve a deal and send it to the full Congress for approval by Dec. 23.

That's it for today. Check back tomorrow for Day 22's look at more super committee revelations or, just as likely, reports of no progress.