GOP Senators coming around to taxes in deficit deal?

Two Republican Senators told attendees at the Reuters Washington Summit last week that nearly half of the Senate is pushing for a deficit-reduction approach that would cause pain for both sides. For the GOP, that means accepting taxes in any deal. 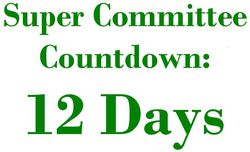 The big problem, however, is that the lawmakers talking taxes are not part of the Joint Select Committee on Deficit Reduction.

Republican Sens. Lamar Alexander of Tennessee and Tom Coburn of Oklahoma told the Reuters gathering that a growing number of their party colleagues know that significant tax increases will be needed to strike a budget deal that also reins in health and retirement costs.

Alexander, who is stepping down from his post as Republican Conference chair (the GOP's number three leadership slot) next year, said Republican rank-and-file could back a deficit compromise with new revenues as long as Democrats showed some willingness to give on entitlement programs.

The comments by the two Senators doesn't mesh with the official word from their party's leaders.

And so far, the six Republicans on the super committee are still a united front, at least publicly, against any deal that includes new taxes or tax increases.

We'll know by Nov. 23 whether the GOP leadership or Coburn and Alexander are on the mark.