Recriminations Monday, the official 'holiday' following the deficit super committee's failure to agree on a plan

Finger-pointing, and not always the index digit, is standard operating procedure in Washington, D.C. 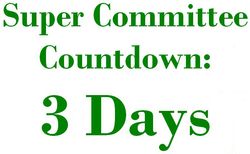 And the blame game is in high gear this Monday as the deficit reduction super committee is poised to announce -- after the stock market closes, as if the financial world hadn't already factored in this expected result -- that it couldn't reach an agreement.

House Speaker John Boehner issued a memo this morning saying that the Joint Select Committee on Deficit Reduction "was unable to reach agreement because President Obama and Washington Democrats insisted on dramatic tax hikes on American job creators, which would make our economy worse."

Super committee members from both sides -- Sen. Jon Kyl (R-Ariz.) and Sen. John Kerry (D-Mass.) -- also made the rounds on today's morning TV talk shows, each insisting that his side was more than willing to compromise but that it was the other side that remained intransigent.

So much for the declaration when the panel was seated that failure was not an option.

What's next: Neither the House nor the Senate is in session this week. But there will be lots to tend to when lawmakers return after Thanksgiving.

There are spending bills for the current fiscal year that must be completed.

There also are payroll tax holiday and unemployment benefits, both of which expire at the end of the year, to consider.

Lawmakers had hoped that extensions of the payroll tax holiday for workers and unemployment benefits for those out of jobs would be rolled into the super committee's deficit plan.

Now the House and Senate will have to deal with these politically and economically volatile issues on their own.

And don't forget about extenders. There also was hope that these popular temporary tax breaks -- including a patch to keep the alternative minimum tax (AMT) from hitting middle-class taxpayers, write-offs for state and local sales taxes, college tuition and educator expenses, as well as numerous business related tax breaks -- set to expire Dec. 31 might be part of an overall deficit plan.

Think again, Congress. Now you'll have to deal with all this before you can head home for Christmas.

About sequester: And then there's the issue of the automatic budget cuts set to kick in once the deficit committee surrenders.

While the cuts will be triggered in January 2012, they won't actually take effect until January 2013.

The Congressional Budget Office has estimated that when (if) the spending cuts do apply, domestic programs would be cut by 7.8 percent and Medicare spending would fall by about 2 percent. Defense programs would face the biggest cuts, around 10 percent.

Several major social programs, however, are exempt from the cuts under the agreement that created the super committee. They include Social Security, Medicaid, veterans' benefits and various antipoverty programs.

That's why, say some political observers, many Democrats were willing to oppose Republican proposals for entitlement program cuts. They decided that the automatic cuts will likely be less harmful than any deal they could reach with the GOP.

While Congress probably won't address the impending cuts as they wind down the 2011 session since they've already got plenty to deal with by Dec. 31 , expect 2012 to bring new efforts to erase the sequestration rules, despite Obama threats to veto such attempts.

Even without resistance from the White House, changing the fiscal rules would like cause a repeat of the credit rating debacle America faced when it pushed the debt ceiling debate to the 11th hour.

Combine all these leftover fiscal matters with a 2012 election, and next year on Capitol Hill will be interesting if not necessarily productive.