You knew this was going to happen. People are looking for ways around severe spending cuts as the super committee seems stalled in its efforts to come to an agreement.

The Nov. 23 deadline for the members of the bipartisan deficit reduction panel to come up with a plan is bearing down. And both sides seem nowhere near making the concessions necessary to get a plan to their colleagues in the House and Senate.

Without a plan, or even with one but Congress doesn't OK it by Dec. 23, then $1.2 trillion in automatic spending cuts to defense and domestic programs will kick in.

Even though the cuts won't take effect until 2013, the threat of them in being announced in 2012, an election year, is worrying some lawmakers. So they've been talking about ways to get around them.

According to The Hill newspaper's On the Money blog, Sens. John McCain (R-Ariz.) and Lindsey Graham (R-S.C.) are among the members of Congress who have said they would try to void the spending cut triggers. 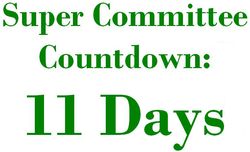 Not so fast, says the president.

On Friday, Nov. 11, Obama told the co-chairs of the Joint Select Committee on Deficit Reduction that he  expects the panel to do its job.

But if the super committee can't, Obama made it clear in separate phone calls to Rep. Jeb Hensarling (R-Texas) and Sen. Patty Murray (R-Wash.) that he will not accept any measure that attempts to turn off part of the sequester.

"The sequester was agreed to by both parties to ensure there was a meaningful enforcement mechanism to force a result from the Committee," Obama told Hensarling and Murray according to a White House readout of the conversations.

"Congress must not shirk its responsibilities," the president said, and reiterated that any deficit reduction plan put forth by the super committee "must be balanced, and will require tough choices by both sides, including looking at revenues and entitlements."