Deficit panel might pick tax amount, but let others figure out the details

Harry Truman is famous for, among other things, the sign on his desk proclaiming that "The Buck Stops Here."

Buck passing, not stopping, is an area in which Congress is expert. Witness the Bush era tax cuts, designed so that the creators of the tax breaks wouldn't have to deal with their expiration. That's OK. That tax buck was passed along at the end of 2010 for two more years, meaning that some new Representatives and Senators will have to deal with them.

Now we hear that the Joint Select Committee on Deficit Reduction might pass along some of the tax-writing tasks. 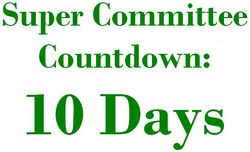 "With a little over a week left to reach a deal, members of the Congressional deficit reduction panel are looking for an escape hatch that would let them strike an accord on revenue levels but delay until next year tough decisions about exactly how to raise taxes," reports the New York Times.

The super committee would do some work. Its 12 bipartisan members would come up with the amount of new revenue to be raised, says the Times, but would leave it to the Congressional tax-writing committees -- Ways and Means in the House, Finance in the Senate -- to hammer out the specifics.

Of course they would. Both panels, especially the Ways and Means with its Constitutional authority to create any new tax laws, carefully guard their tax-writing powers.

Letter, but not spirit of the law: The "general now, specifics later" revenue raising approach technically would meet the requirements to avoid the automatic budget cuts, say the supporters.

It also would essentially give lawmakers more time to meet their $1.2 trillion deficit cutting goal, since the tax committees could work beyond the impending Nov. 23 deadline.

If the special committee can pull this off -- and it's unclear whether Obama, who told the panel co-chairs last week that he won't stand for any gimmicks to avoid the hard decisions that if left unmade would prompt defense and entitlement program budget sequestration -- it also means the process could be dragged well into 2012.

And that would make for an even more interesting election year.

I wonder if the deficit panel will meet the deadline.

Obama is doing great with his "no gimmicks" plan in my opinion. Especially where he tried to tax the upper class, which would include our congress, and they all said no. Now everyone can see in plain site, (even plainer than before), where our problem lies.