It seems that the Joint Select Committee on Deficit Reduction doesn't want to wait to make Thanksgiving plans. 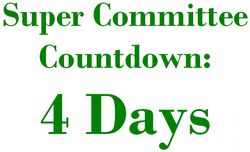 The super committee reportedly has reconciled itself to failure and is expected to announce, possibly tomorrow, that it can't reach a debt deal.

I totally understand the thinking. No need to wait until the Nov. 23 deadline if a deficit deal can't be reached. These turkeys should just go ahead and get a head start on the Turkey Day holiday.

"I'm going to be waiting all day," Washington Sen. Patty Murray, Democratic co-chair of the committee said during an appearance on CNN's State of the Union.

"I'll be at the table, as I've been, willing to talk to any Republican who says, look, my country is more important, this pile of bills is not going to go away, the challenges that we have is not going to disappear, we need to cross that divide," said Murray.

Her Republican counterpart, Rep. Jeb Hensarling of Texas, said "nobody wants to give up hope." But, Hensarling told Fox News Sunday, "Reality is to some extent starting to overtake hope."

Technically, the committee members' hands are tied. Although the official deadline is midnight Wednesday, the committee is legally barred from voting on any plan that was not made public at least 48 hours in advance.

Failure fallout: If the super committee does concede debt defeat, the Washington Post reports that the move will set up a year-end battle over emergency jobless benefits and an expiring payroll tax holiday.

The panel had been considering including those (and other) provisions as part of an overall deficit reduction deal of at least $1.2 trillion over the next decade.

There also are the extenders, those temporary tax provisions that regularly get renewed from year to year, to consider.

The bottom line is that the end of this first session of the 112th Congress will be like so many others. A hodge-podge of legislation will be pushed through by the end of the year.

The script also is written for the second session.

When Congress reconvenes in January 2012, it will be just like other reelection year sessions. That means a lot of talk about the deficit, but little action.

There will, however, be plenty of finger pointing, introduction of bills that everyone knows will go nowhere and political posturing for use during campaigns.

The fate of those lower income tax and capital gains rates, as well several credits and the estate tax, will depend in large part on who the voters choose in November.

To paraphrase a line from another classic holiday tale that gets replayed year after year, God help us everyone.

Somebody needs to step up and lead. Things are a mess and looking elusive. Now I don't think anyone expected a deal today, but it would be nice to see progress by early next week.