What's more popular than the U.S. Congress? Just about everything.

A New York Times/CBS News poll conducted in October found that Americans have had it with their federal legislators, giving them a paltry 9 percent approval rating. That sad percentage assessment of Congress is this week's By the Numbers figure.

Sen. Michael Bennet, however, took the survey data one step further and discovered just how much we loathe our lawmakers.

According to the freshman Democrat from Colorado, Congress' 9 percent approval rating bests only Americans' lack of regard in 2008 for Cuban dictator Fidel Castro. It ties the Capitol Hill legislators with the low ranking Americans in 2007 gave to another political strongman, Hugo Chavez of Venezuela.

Who else rated better than Congress? Bennet's research revealed that he and his colleagues are less popular now than other survey findings for the IRS, the airline industry, lawyers, Richard Nixon during Watergate, BP during the oil spill in the Gulf of Mexico, Paris Hilton and the United States becoming a Communist nation.

Bennet put his data on a chart to illustrate just how unpopular Congress has become and then presented his findings to his fellow Senators. 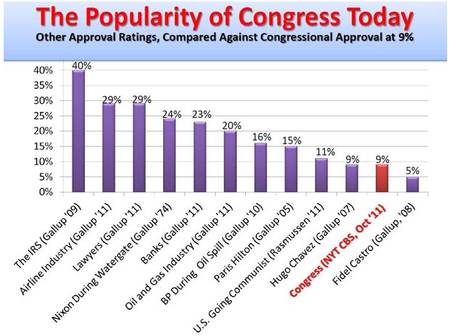 Bennet was appropriately somber in discussing Congress' dire straits with his colleagues.

But thank goodness we also have Comedy Central's Jon Stewart to provide us with another perspective on why we're so fed up with Congress.