Tax notices: A scary letter from the IRS

You just got the biggest scare of your life and it has nothing to do with Halloween.

The Internal Revenue Service sent you a notice. 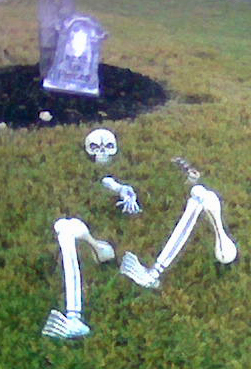 Photo by me of a neighbor's
yard skeleton Halloween decoration.

These letters can indeed be frightening.

There are lots of reasons why the IRS is writing.

Yes, some notices do request more tax money, but others are less alarming.

The IRS also sends out notices to notify you of changes to your return or to request additional information.

In many cases, you can deal with an IRS notice quickly, completely and relatively painlessly.

Here are a few tips (and a few more here) to help you take care of the tax notice bogeyman.

Don't ignore the notice. If you don't pay attention to the IRS inquiry, you run the very real risk that the issue will indeed become a zombie tax problem that won't die and, in all likelihood, will get much worse.

Read the correspondence. Don't just skim it. Each notice offers specific instructions on what the IRS wants from you.

Compare the information provided in the notice with your records. If, for example, the IRS says you forgot to report some income, double check the filing in question.

When the IRS is correct -- It happens. The IRS once told me I overpaid and another time that I didn't include all my capital gains income; the agency was correct in both instances. -- then you don't have to do anything … unless you owe more. In that unfortunate case, send in the amount due and you're done.

If you're sure the IRS is wrong -- that happens, too -- then send a written explanation of why you disagree and include any documents and information you want the IRS to consider, along with the bottom tear-off portion of the notice.

Mail the information to the IRS address shown in the upper left-hand corner of the notice. It will take the IRS at least 30 days to get back to you.

You can call the IRS with questions about the notice if you're really craving a terrifying experience this Halloween season or any time of year. The telephone number is in the upper right-hand corner of the notice. Have a copy of your tax return and the notice handy.

Why the IRS is writing: As with all its documents, IRS notices have numerical names. The list below covers some of the more common notices that the IRS sends to individual taxpayers.

You'll find a brief explanation of what the notice covers. If you want more, you can click on the links for additional information and sample notices from IRS.gov.

CP 14 - Balance Due on Unpaid Taxes -- Informs the taxpayer that the IRS has determined he/she owes money on unpaid taxes.

CP 32 - We Want to Send You a New Refund Check -- Explains why the IRS is sending a new refund check, what needs to be done before it can be sent and what the IRS will do after the recipient replies.

CP 54B - Problem With Name and Identifying Number -- Informs the taxpayer that the name and identifying number on the tax return don't match information the IRS received from the Social Security Administration. Examples of what might cause such a mismatch are provided and the notice explains the steps the taxpayer needs to take to resolve it.

CP 54E - Problem With Name and Identifying Number -- Tells the taxpayer that the name and identifying number used on an estimated tax payment don't match information from the Social Security Administration. As with the CP 54B, the CP 54E notice gives examples of what might cause a mismatch and explains the steps the taxpayer needs to take.

CP 54Q - Problem With Name and Identifying Number -- Reminds the taxpayer that the IRS is holding a refund because the name and identifying number used on the tax return don't match the Social Security Administration data. Examples, explanations, next steps, etc.

CP 60 - Removed an Erroneously Credited Payment -- Tells the taxpayer that a payment was applied to the taxpayer's account in error.

CP 75 - EITC or AOTC Portion of Refund Under Audit -- Informs the taxpayer that the IRS is delaying the Earned Income Tax Credit (EITC) or Additional Child Tax Credit (AOTC) portion of the filer's refund because the agency is examining parts of the tax return. The notice explains what areas are under possible added scrutiny and what steps the IRS will take next.

CP 75A - EITC Portion of Refund Delayed -- Informs the taxpayer that the IRS is delaying the EITC portion of the refund because the agency might examine Form 8862, Information to Claim Earned Income Credit After Disallowance, that was filed with the return.

CP 75C - EITC Portion of Refund Disallowed -- Informs the taxpayer that he/she was banned from claiming the Earned Income Tax Credit (EITC) in a prior tax year due to intentional disregard of the rules or a fraudulent claim. Since the ban is still in effect, the IRS disallowed the EITC for the current tax year.

CP 75D - EITC Portion of Refund Disallowed -- Informs the taxpayer that the IRS is auditing his/her return and needs documentation to verify the income and withholding reported on the 1040. This may affect EITC eligibility, as well as other refundable credits that you claimed. Any refund is held pending the results of the audit.

CP 79 - One or More Credits Claimed Were Denied -- Tells the taxpayer that the IRS denied one or more of the refundable credits you claimed on his/her individual income tax return.

CP 79A - Refundable Credit Denied, 2-Year Ban Applied -- Notifies the taxpayer that he/she is banned from claiming the EITC for two years and that the taxpayer must complete an additional form to claim the credit in the first year after the ban is lifted.

CP 79B - Refundable Credit Denied, 10-Year Ban Applied -- Notifies the taxpayer that he/she that IRS denied all or some of the refundable credits you claimed on the individual income tax return. In addition, the IRS determined the filer made a fraudulent claim and the taxpayer is prohibited from claiming the credit for the next 10 years.

CP 88 - Delinquent Return Refund Hold -- Informs the taxpayer that the IRS is holding any refund because the taxpayer has not filed one or more tax returns and the IRS believes he/she will owe tax.

CP 90 - Final Notice of Intent to Levy and Notice of Your Right to a Hearing -- Informs the taxpayer that he or she still has a balance due and that the IRS intends to levy certain assets unless the taxpayer takes appropriate action within 30 days.

CP 166 - Notice of Insufficient Funds -- Informs the taxpayer that the IRS was unable to process payment due to account's insufficient funds.

CP 501 - Notice of Balance Due (money owed IRS) on a Tax Account -- Informs the taxpayer that the IRS has determined that he/she has a balance due on one of his/her tax accounts.

CP 2000 - We Are Proposing Changes to Your Tax Return -- Informs the taxpayer that the IRS is proposing changes to the filer's return based on different information reported by employers, banks and other payers. The CP 2000 provides detailed information about the differences, the proposed changes and what to do if the taxpayer agrees or disagrees with the proposal.

Bitcoin owners on notice: In July 2019, the IRS added three new notice letters. These are directed at owners of virtual currency, like Bitcoin, Litecoin, Ethereum and others.

Remember, Uncle Sam considers digital dollars an asset like stocks or other property you own. The sale of those assets that results in a profit triggers, in most cases, taxable capital gains.

Business tax notices, too: The above notices are for individual taxpayer issues. When the IRS has questions about a company's tax returns, it has a separate set of notice for business filings.

If you get a business notice or an individual notice not listed here, you can get more information on it by using the IRS' online notice search tool.

Here's hoping you escape from these tax notice monsters this Halloween and throughout the tax year.

Musical notice option (added July 28, 2019): No, I'm not singing (the hubby says y'all should be eternally grateful!).

But I am shamelessly plugging my tumblr blog Tumbling Taxes, which this month (July 2019) features this post, as well as a video of Thomas Rhett's song "Notice." Enjoy!

I think this is a great summary, thanks!

One thing I would point out is to compare the items on the notice to your return. If the items left off the return are related to capital gains or qualified dividends, the IRS does not re-calcalculate the return correctly. First, they assume no basis and second, they don't use preferrential rates.

In summary, if you left something off, it's best to recalculate your return yourself after you add the information and make sure the additional amount due is the same as on the IRS notice. You can agree that you left something off the return but disagree with their calculation of additional tax due. It takes a little extra time but it can save you a lot of tax dollars if you go through these extra steps.