Somebody better head over to the House GOP leadership offices, Republican National Committee and Fox News with handfuls of Prozac, Xanax and Cymbalta. Those folks are going to need calming down in the wake of a survey that found most millionaires said their taxes need to be hiked.

That's right, Warren Buffett's peers agree with his call for higher taxes on higher earners. And that revelation earns it this week's Follow-up Friday spotlight.

More than 67 percent of the millionaire investors polled this month by Spectrem Group's Millionaire Corner say that the U.S. economy can be improved by implementing tax hikes for the wealthiest Americans. That sector was defined as individuals with more than $1 million in income.

In fact, the opinions of the well-to-do are pretty much in line with what other, less wealthy Americans suggest to get the United States on sounder fiscal footing: We need a mixture of budget cuts and tax increases. 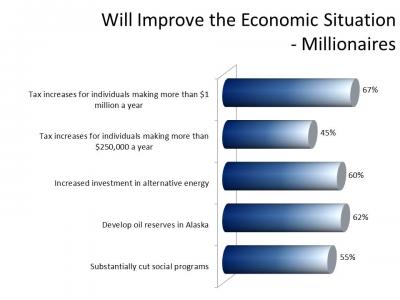 Specifically, the millionaires who were polled say that the country's economic situation can be improved through tax increases, cuts in social programs and targeted increases in government spending. Yes, they support some sort of stimulus.

What to trim: As for the cuts, 55 percent favor substantially cutting some social programs to reduce debt, with more than 52 percent favoring Social Security benefits restructuring for Americans now under the age of 50.

What to pay for:  More than 60 percent of the millionaires favor increased investment and research in renewable energy, such as solar energy and alternative sources of fuel.

But fossil fuel wasn't forgotten. More than 62 percent say that developing Alaska's oil reserves would be a good economic idea.

And another 60 percent favor infrastructure projects to create jobs that would improve road, bridges and other public structures. I'm sure Obama wished these folks had spoken up sooner!

Smaller economic pinches: The survey also found that millionaires are not immune to the bad economy. They just tend to sniffle while their less affluent neighbors come down with full-blown fiscal colds.

Nearly 32 percent of millionaires, according to the survey, have increased their savings because of the economic downturn.

More than 19 percent have paid down debt in response to the economic situation.

Almost 18 percent have had to dip into funds set aside for other purposes.

And 5 percent of millionaire households have a member return to either full- or part-time work. It's good to know that some folks are finding jobs.

Why don't the millionaires just donate more instead of having their taxes increased?