The ultimate deadline for filing a 2010 tax return is less than a week away. It's also the last chance to claim the Making Work Pay tax credit.

You remember this tax break, right. The $400 tax credit for single filers, double that for married couples filing jointly even where only one spouse had a job.

Except when it comes to taxes, there is no free money. 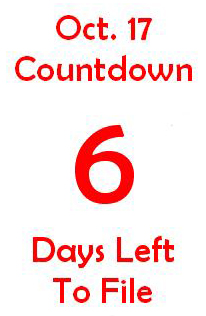 You have to make sure you qualify and then you have to fill out more tax paperwork. Sometimes it almost doesn't seem like it's worth messing with.

Credits are dollar-for-dollar tax benefits. If you owe Uncle Sam money, a nonrefundable tax credit can reduce or even zero out that bill.

A refundable credit is even better. As its name indicates, when your credit is larger than the tax amount you owe, you'll get the excess back as a refund.

And the Making Work Pay credit is refundable.

The tax credit at first seemed great. Withholding rates were adjusted so that your employer took out less tax from each paycheck, giving you a few extra dollars every pay period.

To make sure the IRS accounts for the credit cash you've already received, you have to fill out Schedule M and send it in with your tax return. All my fellow late filers and I have until Monday, Oct. 17, to finish our taxes and send in our Making Work Pay claims.

If you don't, the IRS won't count the amount against your tax payments.

And that means your tax bill will be larger or your refund smaller than it should be.

Making Work Pay replacement: The 2010 tax year is the last one in which the Making Work Pay credit and its extra filing work applies. In its place for 2011 is the 2 percentage point cut in workers' Social Security tax withholding amounts.

The only problem here is that for some folks, the payroll tax cut is not as beneficial as the Making Work Pay credit.

Still, any tax relief helps. And the president is pushing for continued payroll tax cuts in 2012.

But taxing workers less is not getting the reception from Republicans on Capitol Hill that most thought it would.

The payroll tax cut is part of Obama's $447 billion jobs bill, which is in the process of being defeated in the Senate. Yes, the Senate, the chamber in which the president's Democratic Party is in the majority. It's a procedural vote, not one on the merits of the legislation, but it still means that the bill is going nowhere fast.

But some portions of the bill, including the payroll tax cut, are likely to be pulled out and dealt with separately or, more likely, added to other legislation.

So stay tuned to see what tax changes might show up in your paychecks come Jan. 1, 2012.

Final tax-filing tips: Make sure you don't miss any filing tips as we head toward the final 2010 tax filing deadline.

I must take a moment to brag here. I finished the hubby's and my tax return last night and it's now on its way to the IRS for processing.

But if you're still working on yours, information to help you meet next week's due date can be found at the special Countdown to Oct. 17, 2011, blog page.