What do home foreclosures and credit card transactions have in common? In the wonderful world of Congress and the Internal Revenue Service, a lot.

When a housing bill was enacted in 2008 to provide relief to folks facing foreclosure, it included a provision calling for the IRS to keep closer tabs on credit and merchant card, collectively known as payment card, transactions.

This reporting requirement also covers third parties contracted by payers. The IRS calls them electronic payment facilitators. You and I know the most popular one as PayPal.

The new payment tracking system was devised as a way to pay for the housing bill, but the effective date of the new reporting rule was pushed until 2012.

You'd think that almost four years later everyone would be ready for this to take effect. Not so.

Last week the IRS decided everyone needed more time to comply with one part of the credit card transactions reporting law.

The tax agency announced that it was postponing for one year withholding rules on credit card payments, which were to start with 2012 payments, effectively giving everyone until 2013 to get a better handle on that process.

And that year is this week's By the Numbers figure.

The backup withholding was seen by opponents of the new rule as the most difficult part with which to comply, so this one-year delay is good news.

And it comes on the heels of a Treasury Inspector General for Tax Administration (TIGTA) report that criticized IRS plans to implement the credit-card reporting law.

Reporting payments still required: However, the requirement that credit card payers track 2011 transactions and report them in 2012 is still in effect for next year.

That means that certain 2011 payment data -- specifically, when the reporting entity makes more than 200 payments during a calendar year having a gross aggregate total of more than $20,000 -- still must be gathered and reported in 2012 via a new document, Form 1099-K, the latest draft form shown below. 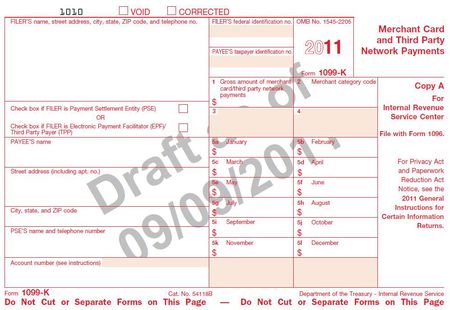 But the IRS also has announced that it won't impose penalties for incomplete filings for that first set of reports.

To be granted such a waiver, payers still must make what the IRS considers a good faith effort to comply with the law. The IRS is expected to provide additional guidance shortly on the reporting.

Meanwhile, the Electronic Transaction Association told its members to gather and file the 2011 tax year 1099-K information to the best of their ability because those "not filing at all would still be subject to the penalties."

Details on the one-year delay of backup withholding and penalty postponement, or transitional relief as IRS calls it, are in Notice 2011-88 and Notice 2011-89. The IRS also has a comprehensive FAQ page dealing with the credit card transaction reporting requirements.

Extra paperwork = more money: The motivation for the new credit card reporting rules was, as is usually the case on Capitol Hill, money.

During debate of the housing bill, the Treasury Department noted that credit cards and debit cards are an increasingly common form of payment for property and services rendered, but that "some merchants fail to report accurately their gross income, including income derived from payment card transactions."

That is, folks were hiding the money they got this way.

But, notes the IRS, third-party information reporting has been shown to "increase voluntary tax compliance, improve collections and assessments within IRS, and thereby reduce the tax gap."

So the reporting requirement made it into law, in large part because the amount by which this new rule is projected to reduce the tax gap over 10 years is around $10 billion.

Just the latest delay: This IRS decision to postpone a tax reporting requirement is the second such delaying move in just over a year.

The Patient Protection and Affordable Care Act contains a requirement that the value of each employee's workplace-provided medical coverage be reported to the worker on his or her W-2. It's informational only, a way for employees to know exactly what their boss is paying for their health benefits.

That was supposed to show up on the W-2s we'll get next January with all our 2011 tax data.

But in October 2010, the IRS announced that W-2 reporting of 2011 workplace health benefits is optional for employers. The IRS decided back then that many employers needed additional time to make changes to their payroll systems or procedures to comply with the health care reporting requirement.

Some companies probably were able to get things lined up, so you might find that health care value info on the earnings statement you get next January. Or you might not.

And if you get credit card payments in 2012, you'd better let the payer know your taxpayer identification number or the 1099-K that you get in 2013 will include the amount of backup withholding collected from the amount.

The ultimate slap was when they said all payments to attorneys, and certain other types of payment.

The instructions for 1099-MISC this year say "New Form 1099-K. Payments made with a credit card of payment card and certain other types of payment, including third party network transactions, must now be reported on Form 1099-K by the payment settlement entity under section 6050W and are not subject to reporting on Form 1099-MISC. See the separate Instructions for Form 1099-K". So I skipped the 1099-MISC for everyone paid via Paypal. Later I realized that unless they made over $20,000 and had 200 transactions, they wouldn't be getting a 1099-K. Which makes me think I should give them a 1099-MISC. This is confusing for yr average small business owner sending out their 1099 forms!

The ultimate goal of the IRS is to have everyone report every payment made to someone else, no matter what the purpose. The 1099-Misc reporting started off a few years ago for payments to individuals over 600.00, then they began adding to that. The ultimate slap was when they said all payments to attorneys, no matter how much, and whether they were an individual or a corporation, must be reported. How could they pick on such an elite and honest group? It's getting to the point where every business will have to hire one or more employees just to complete these bloody forms.