All of us tax procrastinators have almost a month to get our 2010 tax returns to the Internal Revenue Service. If you, like me, are still finishing up your 1040 for last year, you can check out the countdown clock there in the left column so that you don't miss the ultimate deadline.

And the 2011 tax filing season doesn't start for three and a half months.

But that hasn't stopped folks from getting out their handy calculators and coming up with projections of inflation-adjusted tax amounts for 2012.

Actually, it's not too early to start thinking about 2012 taxes. The IRS needs the coming year's tax parameters to create the appropriate withholding data for those future paychecks. And if you're figuring that, it makes sense to go ahead with the rest of the inflation-adjusted amounts.

Among the tax components affected by inflation are the exemption amount for taxpayers and their dependents, the standard deduction, the gift tax exclusion, various earning limits that affect eligibility for or the amount of tax breaks available and, of course, the earnings in each of the income tax brackets.

In 2011, low inflation meant that most amounts for most inflation-adjusted tax categories were about the same as in 2010.

Tax publisher and software firm CCH has come up with 2012 projections based on an annual inflation rate of 3.8 percent.

That's significantly higher than the 1.4 rate used for 2011 figures -- someone please tell the Fed -- and it blows away the historically low 0.2 percent rate that was used for 2010 tax indexing.

The 3.8 percent annual inflation rate means most associated tax amounts for 2012 will increase.

Any of the many, many inflation-adjusted numbers were good candidates for this week's* By the Numbers recognition. The 3.8 percent inflation rate won since it influences all the rest.

But with all those other amounts on hand, I couldn't stop at just 3.8. So here are some of the other figures, per CCH calculations, that are tied to that inflation factor.

Personal exemptions: The exemption amount claimed by each taxpayer, his or her spouse and dependents for 2012 will increase to $3,800 from the 2011 level of $3,700.

The Tax Foundation also ran the inflation-adjusted numbers for 2012 and judging from the table below, that Washington, D.C.-based tax research group also used a 3.8 percent inflation rate. Its figures match those of CCH. 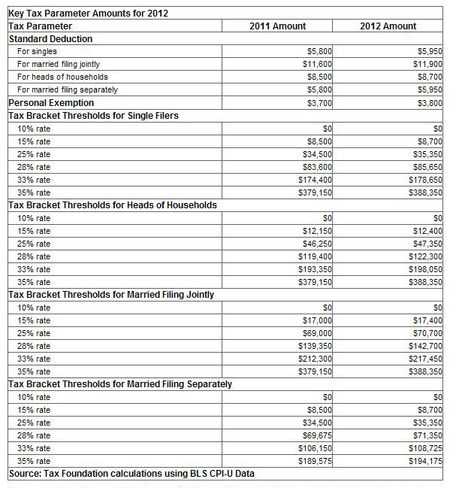 Gift and estate taxes: CCH predicts that the gift tax annual exemption next year will hold at $13,000. Why no change from 2011? The Internal Revenue Code says this amount can increase only when the inflation adjustment produces an increase of $1,000 or more.

Remember, though, if Congress doesn't deal with the estate tax next year, that law's provisions will return to the less favorable pre-2001 levels in 2013.

These are just a few of the tax amounts adjusted annually for inflation.

Both CCH and the Tax Foundation emphasize that these amounts are just projections for the 2012 tax year and have not been confirmed by Uncle Sam. The IRS will issue its 2012 figures for tax provisions affected by inflation in the next month or so.

When those official numbers are final, we'll let you know.

*Yes, regular readers, you are correct. By the Numbers is supposed to be a Sunday feature. But as I noted over the weekend, blogging and other real life things kind of got out of control last week. Plus, I spent late Sunday afternoon cursing watching the Cowboys and then needed the evening to recover from their overtime win. So I shifted things a bit. Thanks for your understanding and I promise to try to get back on schedule next weekend.