Welcome to the cruel heart of the Atlantic hurricane season.

Folks are still cleaning up Hurricane Irene damage along the Eastern Seaboard. Meanwhile, Gulf Coast residents are keeping an eye on Lee, who was upgraded this afternoon to a tropical storm by the National Hurricane Center. 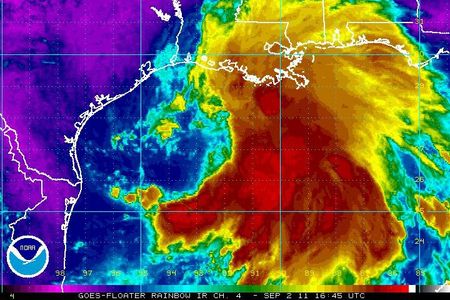 The National Hurricane Center upgraded Tropical Depression 13 to Tropical Storm Lee as of 2 p.m. EDT, Friday, Sept. 2. Maximum sustained winds have increased to 40 mph, with gusts to near 60 mph reported on oil rigs north and east of the center at elevations a few hundred feet above the ocean surface. Some further strengthening is forecast. Tropical storm warnings are in effect for portions of the northern Gulf Coast.

Here is Texas, we'd love to get some soaking rain from Lee, but it looks like he's going to stay east of the Lone Star State. We wish folks in Louisiana and Mississippi, where current forecasts say that Lee has the greatest chance of coming ashore, the best. We definitely don't want them to suffer any damages, major or otherwise.

In the island commonwealth of Puerto Rico and the mainland states, only specific cities and counties have been designated as the most damaged and therefore eligible for special federal, including tax, relief. They are:

Taxpayers who live or have businesses outside the covered disaster areas but who sustained storm damage should call the toll-free IRS disaster hotline at 1-866-562-5227 to request tax relief.

Other locations could be added in coming days after additional damage assessments by FEMA.

Available tax relief for storm victims: In addition to possible federal loans, individuals who live in these locations or have a business there may qualify for tax relief.

The major option is the ability to file an amended return and claim damage losses on the prior year's tax return.

You should consider doing this, rather than waiting to claim the losses for the tax year in which they actually occurred, if the refiling will get you a refund or more money back than you originally received. It also will get you the money for repairs sooner.

The IRS also wants affected taxpayers to know that they can postpone certain filing deadlines. For instance, most tax due dates falling on or after Aug. 29 and on or before Oct. 31 have been postponed to Oct. 31.

And if you file estimated taxes, the third payment normally due on Sept. 15 also is postponed until the end of October.

In addition, the IRS also is waiving the failure-to-deposit penalties for certain employment and excise tax deposits due from businesses.

If you're in a designated major disaster area and the IRS sends you a penalty notice, call the telephone number on the notice to have the agency abate any interest and any late-filing or late-payment penalties that would normally be charged.

As for folks in Tropical Storm Lee's path, prepare for his arrival and stay safe!