It will be a slow and painful process because of the many tax breaks that individual taxpayers and companies can claim.

I completely understand that. I have a mortgage. I don't want to give up that interest deduction for promised filing simplicity and a lower overall tax rate until I can see the actual numbers as to how the trade-off will affect, and by affect I mean benefit, me.

That "show me" factor will be key in getting any tax code changes approved.

So far, most of the visuals available tend to illustrate just how large and unwieldy our current tax system is.

One of my favorite graphics is the yearly count by CCH of the number of pages in its Standard Federal Tax Reporter. That's the tax publisher's flagship product used to help decipher the Internal Revenue Code. The ever increasing size of that reference and the tax code has been amazing.

First there's the bar graph showing the number of requests by Congress since 1986, the last year there was a major tax overhaul, for estimates and other analyses by the Joint Committee on Taxation of various tax proposals. Click the image (or here) for a larger view.

As Len Burman notes over on TaxVox, the JCT numbers are necessary if a member wants to get a piece of tax legislation seriously considered.

Burman points out that the chart doesn't differentiate as to how many requests are for new credits, deductions or other tax breaks. Neither does it say how many came from members of the tax-writing Ways and Means Committee and Senate Finance Committee, or from other members whose tax efforts are purely symbolic unless they find a W&M or SFC cosponsor.

What about when the historic Tax Reform Act of 1986 was being written?

"The JCT was really busy that year," writes Burman. "There were 474 requests. But since then, the trend has been almost exponentially upward."

So just how many of these thousands of tax estimates made it into the Internal Revenue Code? That's where my second new favorite graphic comes into play.

The Washington Post has created an interactive graphic that lets us look at the number of tax breaks available in 2011. 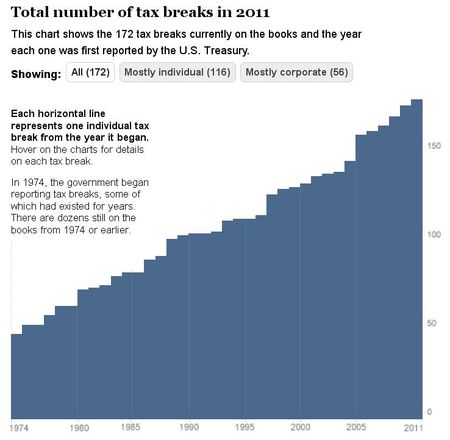 Click on the image (or here) to go to the interactive graphic.

The Post's chart shows the 172 tax breaks currently in the tax code. You can switch from the full list to the individual breaks to the corporate ones. Or you can look at the tax credits and deductions by category (education, energy, health, environment, etc.).

And by mousing over the graphic, you'll see details on each specific breaks, including when it was created and what it costs.

I know how I'm spending the afternoon!

While all these tax code related graphics are great fun, they also underscore the challenges facing the Joint Select Committee on Deficit Reduction.

The deficit super committee's efforts will add to the number of estimates that the Joint Committee on Taxation will be knocking out in the next few months. When it's all said and one, it will be interesting to see what the 2011 bar looks like on that graph.