Backing away from the no-tax pledge, conciliatory tax talk: A D.C. miracle? 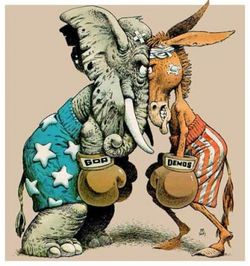 Sure, there have always been sharp differences between Democrats and Republicans. But I remember a time in Washington, D.C., when opposing points of view were expressed in an enthusiastic but civil manner and the business of the country was paramount on both sides of the political aisle.

Sadly, those days are gone. Every appointment by a sitting president is subject to heated and sometimes hateful hearings. Any idea, regardless of merit, is shot down simply because the opposition came up with it first.

It's cliche to compare Congress to an elementary school filled with spoiled kids who just want to fight all the time, but the description too often fits.

Those in charge tend to whip up the partisan animosity instead of showing leadership and trying to ratchet down the heated rhetoric.

And outside agitators in the guises of lobbyists and business trade groups and think tanks seem to get a kick out of stirring the pot and then stepping back and watching it boil over, leaving Americans wondering how the mess will ever be cleaned up.

But it looks like some members are reassessing the current Congressional mood and their actions.

OK with the payroll tax cut: For months, Republicans have resisted the president's call to extend and expand the current payroll tax cut for workers. The tax relief, they argued, was too small to make much difference to workers or the economy.

Now some in the Grand Old Party are actually saying that they'll consider, even support, the 2 percentage point employee payroll tax break.

No-tax pledge second thoughts: Just as notable, or perhaps even more so, is the about face of Republican lawmakers in regard to the highly touted Americans for Tax Reform no-tax pledge.

"At least two Republican congressmen say they don't remember signing it," according to a report in USAToday. "One signed it, but has since disavowed it. A half dozen have bucked pressure from within their own party and never signed it."

And a few others in the GOP have said that while they support the Taxpayer Protection Pledge in principle, they would rather violate it than turn their back on a deal to reduce federal spending.

I don't know about you, but I'm going to be on the lookout for pigs flying down the street.