Yes, I know that sounds like an odd combination and perhaps even a sneaky way to generate more page views, but stick with me. I've found a connection.

The 93rd PGA Championship, one of the sport's major tournaments (or so I'm told by the hubby who works in the industry), is well into its second day. The buzz today is whether Tiger Woods, who yesterday carded the worst opening round in a major of his career, can rebound or even make the cut.

Personally, I don't care. Well, actually I do; I hope Woods continues to struggle on the course.

Yes, as a wife, I'm holding his extreme infidelity against him. We're all human. We all make mistakes. But by some counts as many as 17 mistresses? Really? Some affairs while wife Elin was pregnant with your children? Tacky, irresponsible and unforgivable. 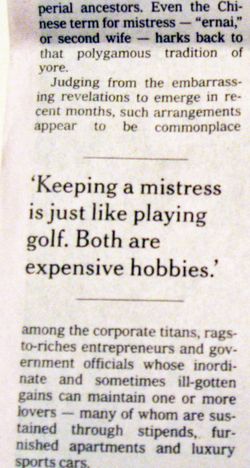 But even before the first pairing of the PGA Championship teed off, Tiger came to mind thanks to the New York Times' story on how China's new wealth has created a market for mistresses.

I wouldn't have read the article if not for the quote inset, pictured there to the right, that caught my eye (this is why I still get a paper version of the newspaper): "Keeping a mistress is just like playing golf. Both are expensive hobbies."

That's a costly lesson Tiger learned the hard way. And what with the divorce, his price was even steeper.

So, you're asking, where are the taxes?

You got it. But first an update from the PGA Championship.

As I type, Australian Adam Scott, who won the Bridgestone Invitational last weekend (with Tiger's recently fired caddy Steve Williams carrying his bag) is tied for third and a Dane, Anders Hansen, is tied for fifth on the tourney's leaderboard.

That international golfers do well on U.S. courses is not unusual.

But non-U.S. golfers have gotten more attention, at least in tax circles, this year because of a Tax Court ruling about how their earnings are taxed when they play in this country.

South African native Retief Goosen, who now lives in England, was a tax guinea pig so that international athletes could find out how the Internal Revenue Service would view their different types of income. At issue in the court case was which payments should count as royalty income based on his image and reputation and which should be considered personal services income.

Goosen wanted his endorsement money treated as royalties is because under tax treaties between the United States and the United Kingdom, royalty income is not taxed. The IRS obviously thought differently.

The Tax Court split the difference.

Because of Goosen's case, global athletes now have some U.S. tax clarity.

And your patience and faith in my ability to connect parts of a seemingly random headline has paid off. Thanks!