What the heck is up Mother Nature? I know we humans are an annoying bunch, but do you really have to keep whacking us?

In less than 24 hours, strong earthquakes have rattled the East Coast and the Rocky Mountains region.

The 5.3 temblor that shook Colorado Monday night was the strongest recorded there in more than a century. It also was felt by residents of Kansas and New Mexico.

Then this afternoon, a 5.9 quake centered in Virginia prompted evacuation of buildings in the nation's capital and shook folks from North Carolina to New Hampshire. It was the strongest quake Virginia's recorded since 1897. Even the vacationing prez felt it while on a Martha's Vineyard golf course.

Meanwhile, Hurriance Irene is still churning toward the Eastern Seaboard. Weather watchers say if Irene stays over water a while, she could work herself up to a Category 4 storm.

And the heat and drought are making much of my home state a tinderbox, with wildfires erupting across Texas from the tiniest sparks.

All these situations underscore the hard reality that there's no escaping disasters.

But you can prepare.

I'm not going to reinvent the wheel here. Instead, here are some links to some of my previous posts on preparing for disasters, as well as some other stories that might be of use and interest:

Manmade disasters count, too: And remember, it's not just natural disasters that we have to worry about. The tax code could be of help for a variety of unforeseen calamities, such as vandalism, burglaries and thefts and even some auto accidents.

That was the case for some of my neighbors, whose house (pictured below) was plowed into by a driver who lost control coming down one of our community's hills. 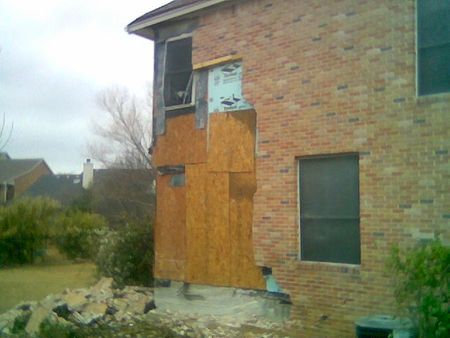 I can only imagine how fast the vehicle was going to jump the curb, take out some trees and shrubs, mow down the wrought iron fence and then take out most of the structure's corner, first and second floors.

That definitely was unforeseen and probably felt like an earthquake, too.

The bottom line, be ready for things you can anticipate and even those you can't.

Depending on which part of the country you live, that could be tornadoes, hurricanes, snow and ice storms, wildfires, floods, earthquakes or, for some folks, a combination. And bad drivers are nationwide.

But when the mayhem finally subsides, don't forget about asking Uncle Sam for some help.