It's no secret that folks in D.C. -- or at least on Capitol Hill -- have a different perspective about just about everything. And they definitely use a different dictionary when it comes to defining things.

That sometimes skewed point of view and questionable lexicography is very evident when it comes to taxes.

Take our current individual income tax rates, which start at 10 percent and top out at 35 percent.

They're commonly called the Bush era tax cuts since they were put into the tax code when George W. Bush was in the Oval Office. However, since Obama made a deal with Congress last December to extend them through 2012, it only seems fair to call them the Bush-Obama tax cuts.

Naming (or blaming) aside, when the various tax law changes were devised back in 2001 and 2003 while W was in the White House they came, as we all know by now, with expiration dates.

Because of that, they have been referred to as temporary. 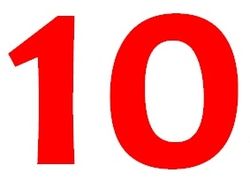 I know. You're looking at 2001 and 2012 and not coming up with 10. Hodge, president of the Tax Foundation, is basing his count on the 2003 tax bill that accelerated the 2001 cuts and also gave us lower captial gains and dividends tax rates.

And that decade (or more if you want to be picky) of tax rate stability earns this week's By the Numbers recognition.

But the length of time that the tax rates have been on the books deserves attention for another reason. I'll let Hodge explain:

Although the Bush-era tax rates have now been the law of the land for longer than the Bill Clinton-era rates they replaced, Washington's arcane budget rules still regard the Clinton-era rates as "permanent law" and require that the budget baseline be calculated as the amount of tax revenues the government could collect were those higher tax rates in effect.

Using that logic (?), the projected revenue that could be raised from the permanent Clinton tax rates are as good as collected. And that means that any difference between those higher projections and the amount that can be collected under the Bush rates is money that must be "borrowed" to finance the government.

So why not just admit that the tax rates in effect are permanent until changed? While it would make the fiscal conversations in the Senate and House more transparent and easier for all to deal with, that's not likely to happen.

Doing so would screw up all sorts of political posturing and budgeting sleight of hand that lawmakers use to pass bills in the first place and then tout while on the campaign trail.