Waiting for the debt ceiling hurricane

Things always seem to even out.

We've had a nonexistent Atlantic hurricane season so far. But that doesn't mean America has been spared a serious summer disaster watch.

In exchange for no 'canes, we're anxiously waiting to see how much damage the impending debt ceiling storm will cause. 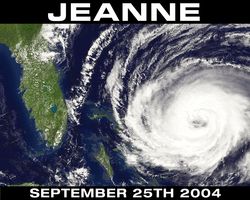 This current economic-political catastrophe brings back some not so good memories of the six hurricane seasons the hubby and I spent in Florida.

We witnessed a couple of major storm near misses.

And during a chaotic three-week span in 2004, we were in the bulls-eye of two serious hurricanes, Frances and Jeanne.

We moved back home to Texas before the 2005 hurricane season started. You do the math.

The toll of waiting: The actual damages from any oceanic outburst is bad enough. But even when a hurricane's effects are minimal, the anticipation is awful and itself can be debilitating.

With Cape Verde systems, you watch a dust storm blow across Africa, form into a weather system off that continent's west coast and then march across the Atlantic, all the while increasing in intensity and potential devastation.

Most of the time, the tropical systems turn, sparing populated areas.

But sometimes storms can't be stopped. And all you can do is watch them come straight for you.

We've know for ages this was on the horizon. One day the report is good; a Congressional agreement is near. Then the course of the debt debate wiggles a bit; a major financial storm is coming right at you.

In advance of hurricanes and other natural disasters, you can make some storm and fiscal preparations.

What can we do about the debt ceiling while we wait for Capitol Hill to intercede?

Unfortunately, not much. And some debt watchers suggest that cooling our fiscal heels is the best move.

But here's what to expect if the debt ceiling situation turns into a Category 5 fiscal storm.

The stock market will tumble. Some economy watchers are predicting a drop of between 20 percent and 30 percent. Once it falls, folks will start selling, exacerbating losses.

So what, you say. You don't own stock. Look again. Do you have a workplace 401(k) account? Then you own stock.

The average 401(k) account balance was $66,520 at the end of 2010, according to data from the Employee Benefit Research Institute and the Investment Company Institute. And almost 60 percent of these funds are invested in the stock market. A 20-percent drop would cost retirement savers on average $7,911; a 30-percent decrease would total almost $12,000.

Even if the market recovers once a debt deal is reached, it's likely to stay lower than it would have for a while because institutional investors are going to be leery about investing in the United States.

That's right, Washington, D.C. politicians, you're going to further tarnish not only your dismal reputation, but also do longer-term damage to our whole country's fiscal standing.

Interest rates will increase. The initial interest rate hike is predicted by many to be 0.5 percent. But anyone who's every carried a balance on a credit card knows that interest rates on revolving credit tend to go up more and more quickly.

Higher rates also will affect folks who have any adjustable debt. And if you're trying to get a fixed rate loan, those rates will be bumped up, too.

Even if you're not currently paying down a debt, higher rates could affect your ability to get future loans. And if you can get a loan, it might not be for as much as you want or need, since higher rates affect how much you can borrow.

This crimp in already slow lending could affect not only individuals, but businesses. Most small companies need loans or lines of credit to operate. They also much have lender approval to purchase new equipment and make other investments in their companies.

The Center for American Progress has put together a white paper on the federal debt ceiling and individual finances. Bankrate.com's senior financial analyst Greg McBride also examines how the debt ceiling duel could floor your finances.

I wish the debt forecast were better. Heck, I wish it would just get a bit clearer.

But like too many hurricanes, we'll probably have to wait until the last possible minute to see if our financial shores are spared.

I love it when the doomsdayers forecast huge stock market drops. People sell like crazy and my monthly 403(b) premiums are able to buy up much more stock than the previous month.

Now, granted I'm 25 years away from retirement. I, too, would be more jittery if I was closer to needing that cash.

Stock investing is a long-term deal.