Victims of major natural disasters often get special tax consideration. But some members of Congress think that this year's incredibly destructive weather across much of the United States calls for added help.

Sen. Richard S. Shelby (R-Ala.) has introduced the Southeastern Disaster Tax Relief Act of 2011. It would provide a variety of temporary tax help to individuals, businesses and governments in the bill's title region that were affected this year by severe storms, tornadoes and flooding. 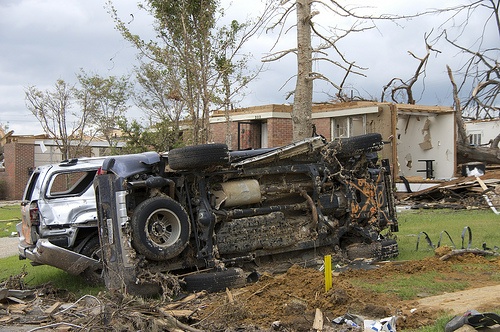 Tornadoes that swept through the southeastern United States on April 27, 2011, left homes destroyed and overturned vehicles in the Cedar Crest neighborhood of Tuscaloosa, Ala. (U.S. Army Corps of Engineers photo by Jeffrey Henon)

The specific states that would be part of the tax-relief-eligible area are Alabama, Arkansas, Georgia, Kentucky, Mississippi, Missouri, North Carolina, Oklahoma and Tennessee.

"The tornado system that devastated the state of Alabama in late April, as well as other recent natural disasters that have plagued the Southeast, were exceptionally tragic events," said Shelby in announcing the bill's introduction. "However, it is important that we continue to pick up the pieces. The Southeastern Disaster Tax Relief Act of 2011 will help those affected do just that by providing temporary tax relief that is necessary in these dire circumstances. It is my hope that this legislation will help people and businesses rebuild and get back on their feet."

The bill's sponsors say it will be paid for by rescinding $12 billion in unspent and uncommitted federal funds. That action, they say, will not increase the federal debt.

As for the provisions in S. 1205, there's no reinvention of the tax relief wheel here. Most of the measure's temporary tax provisions were previously enacted to help out earlier disaster victims. They come from tax law changes in the Heartland Disaster Tax Relief Act of 2009, Gulf Opportunity Zone Act, Katrina Emergency Tax Relief Act and the tax relief provided to southern Kansas following major flooding there in 2008.

In case you don't remember the specific tax provisions of those earlier relief measures, here are some highlights:

Penalty-Free Withdrawals from Retirement Plans
The 10 percent penalty tax for early withdrawals from retirement plans is waived so that individuals affected by the storms can use those savings to pay for recovery efforts. The total amount of penalty-free distributions an individual can receive from all plans, annuities or IRAs is $100,000. Individuals would be permitted to pay the income tax on these emergency distributions over a three-year period. They also could re-contribute the money they take out over a three-year period and receive rollover treatment.

Losses to Individual's Home and Property
Under current law, taxpayers who itemize can deduct casualty losses that exceed 10 percent of an individual's adjusted gross income and a $100 floor. This proposal eliminates the 10 percent and $100 floor requirements for casualty losses resulting from these storms for 2011, allowing the full dollar amount of the losses not reimbursed by insurance to be deducted on individuals' 2011 tax returns.

Special Rules for the Earned Income and Child Tax Credits
These tax credits currently are available only to working individuals with earned income. However, since many people in the disaster areas have lost their jobs, this bill allows individuals in affected areas to calculate their earned income for the Earned Income Tax Credit and Child Tax Credit based on income from the previous year if their income this year is less than it was last year.

Education Tax Benefits
Students in the affected areas would get additional educational assistance. The maximum benefit for the Hope Credit would be doubled to $3,000. Similarly, the bill would double the Lifetime Learning Credit percentage from 20 percent to 40 percent for a maximum credit of $4,000. These benefits are for taxable years 2011 and 2012.

I know, you're wondering about the American Opportunity Credit. As noted earlier, these tax provisions are taken from prior disaster relief laws. The expanded Hope Credit, which has been supplanted by the American Opportunity Credit for most students, was part of the Heartland Relief Act that helped out Midwestern flood victims. It's being used here again for students in the Southeastern disaster areas.

Unlimited Charitable Contributions
Most charitable donations, that is, gifts to groups with IRS 501(c)(3) status, are limited to 50 percent of the donor's adjusted gross income, or AGI. This means if you give $10,000 to your church, you can claim that amount as tax deduction as long as your AGI is more than $19,999. This typically isn't an issue, but in times of disaster, people who can afford to give in excess of the 50 percent limit (or the lower percentage limits for other types of nonprofits) do so and then carry the excess donation into future tax years. Under this bill, individuals and corporations would be able to deduct cash contributions towards disaster relief efforts without regard to percentage limitations for 2011.

Additional Exemption for Housing Displaced Individuals
Individuals who open their homes to those displaced by the disasters specified in the bill would be able to claim an additional $500 exemption for each individual they house for 60 consecutive days. The maximum additional exemption amount is $2,000 and it is available for taxable years 2011 and 2012.

Exclusion of Certain Cancellation of Indebtedness Income
Gross income generally includes any amount realized from the discharge of indebtedness, such as mortgage debt. This bill would provide an exemption for indebtedness discharged by commercial lenders when the forgiveness is in response to damage suffered from the disaster. These provisions expire for discharges occurring before Jan. 1, 2013.

Businesses also get some extra tax consideration, including:

Employee Retention Credit for Employers
Small businesses would get a 40 percent tax credit if they continued to pay employees while the business is inoperable. Eligible employers are those with fewer than 200 employees; wages covered are up to $23,400 paid prior to Jan. 1, 2012.

Expensing for Demolition and Clean-up Costs
Businesses would be able to immediately expense 50 percent of disaster-related demolition and clean-up costs, rather than capitalize them in the taxpayer's basis and depreciate over time. These benefits would expire on Dec. 31, 2013.

This is just a sampling of the tax provisions in the Southeastern Disaster Tax Relief Act. You can read more in the bill's summary or the official legislative language version that was introduced last week.