Tax refunds lost to identity thieves is a growing problem

We are an increasingly electronic society. But our dependence on online options makes it easier for identity thieves to steal our data and, in a growing number of cases, our tax refunds.

The Government Accountability Office reports that in 2010 alone, the Internal Revenue Service identified more than 245,000 incidents of identity theft. Granted, around a quarter of a million ID theft occurrences is minuscule in the overall tax filing population of 140 million individual returns.

But that figure represents a nearly five-fold increase in taxpayer identity theft between 2008 and 2010.

Three years ago, says the GAO in a study released today in conjunction with a Congressional hearing, the IRS noted 51,702 cases of tax return ID theft; in 2010, the number had soared to 248,357 incidents.

Congressional inquiry into tax ID theft: Some of the taxpayers whose tax refunds were stolen by ID thieves testified before the House Committee on Oversight and Government Reform, Subcommittee on Government Organization, Efficiency and Financial Management.

In fact, said subcommittee chair Todd Platts (R-Pa.), it was those taxpayers' personal tax ID theft experiences that prompted him to call for today's hearing.

In addition to relating the sheer dollar amounts they lost to tax return ID thieves, the victimized taxpayers also had concerns about how the IRS handles such incidents.

A big problem is the method of taxpayer involvement that the IRS encourages: electronic filing.

When one of the taxpayers who fell prey to tax return identify theft asked an IRS representative how a person could file a return without validation or proof the he or she was the taxpayer eligible for the refund, she was told, "Do you know how many people file electronically? We expedite the return and match up information later." 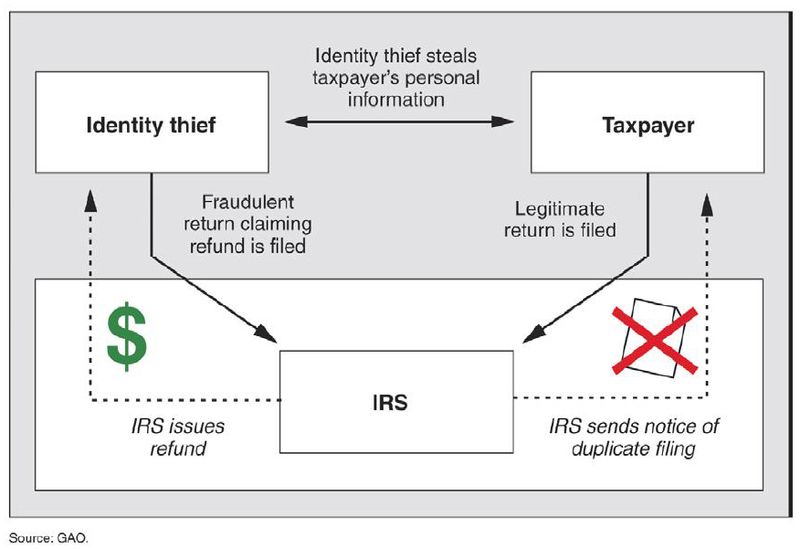 Meanwhile, the real taxpayers due legitimate refunds must wait for their tax money while the IRS sorts out which return is real and which is a fraud.

Adding insult to the injury is the fact that many tax return identity thieves don't get prosecuted, James White, director of strategic issues for the GAO, told the oversight panel.

While it's easy, and understandable, to want to blame the IRS, White noted that the tax agency's ability to address identity theft issues is constrained by several things:

White elaborated in the GAO report on the possibility of future "up-front compliance activities" that could head off tax return identity thieves:

"One example is to match information returns with tax returns before refunds are issued. Before this could happen, IRS would have to make significant changes. Third-party information returns would have to be filed with IRS earlier in the filing season. IRS would also have to improve its automated processing systems. ... If, for example, IRS could match employer information to tax returns before refunds are issued, identity thieves could not use phony W-2s to claim fraudulent refunds."

"Since 2009, the IRS has protected $929.3 million in refunds from fraudulent returns from being erroneously sent to identity thieves," the commissioner testified. "At the IRS, we understand the victims' frustrations and are committed to working with them to mitigate the consequences of identity theft. This means identifying identity theft issues affecting the tax filing process and getting the victims the tax refunds to which they are entitled as soon as possible."

As for prosecution efforts, Shulman said that the Criminal Investigations (CI) division focuses on cases involving questionable refund schemes that are national in scope and then recommends them for prosecution to the Department of Justice. In 2010, he said, 41 such schemes were investigated by CI and 95 percent of individuals prosecuted by the Justice Department for refund-related identity theft went to prison.

Shulman also noted that in 2007, the IRS created the Office of Privacy, Information Protection and Data Security (PIPDS) to provide a centralized privacy program. "In creating a centralized office, we recognized the need to develop and implement standardized identity theft processes across all IRS organizations," he said.

To date, the markers have helped the IRS identify more than 470,000 incidents of identity theft, of varying degrees of severity, affecting more than 390,000 taxpayers, said the commissioner.

Don't make it easy for ID thieves: Obviously, the IRS is aware of the problem that it, and taxpayers, face. That's the first step in preventing refunds from being sent to identity thieves instead of the taxpayers who are due the money.

But we've all got a ways to go.

Now I'm not blaming the victim. Computer hacking and increasingly sophisticated criminal techniques put every single one of us in danger of falling prey to ID thieves.

So as the IRS is working on finding new and improving existing ways to stop, catch and prosecute tax return identity thieves, we taxpayers can help by being diligent and skeptical of possible scams designed to our steal IDs and tax refunds.

In both tax season and beyond, the best protection against identity theft is some healthy skepticism. Things that sound too good to be true usually are.

Years ago, we all watched our mailboxes carefully to make sure no one stole our tax-refund checks. Now, we need to be aware that a crook could file a fake return in our name.
http://www.electrocomputerwarehouse.com/

It is important to be aware of the tax return benefits for the coming tax return 2011 year.

Thanks for the excellent information.