Yep, that's what is on tap at the famed music event tonight.

U2 will be making a long-awaited first appearance at Glastonbury tonight. Among those waiting to greet Bono, The Edge and the rest of the boys as they take the stage will be protesters from Art Uncut.

The group plans to unfurl a giant inflatable message demanding "Bono Pay Up." 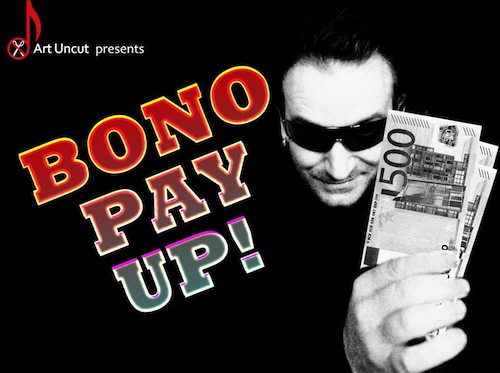 It will mark the beginning of a weekend of events that the group of artists and musicians hopes will raise awareness of what it sees as celebrity tax dodging when the United Kingdom is facing major cuts to public services.

"At a time of austerity," says Art Uncut's website, "we cannot afford to tolerate tax dodging (whether legal or not)."

It's those legal tax avoidance moves by Bono and other wealthy United Kingdom residents that the group is protesting.

Members of U2, the Rolling Stones and numerous other artists across the pond have taken steps to protect their income from taxes. It's a global technique, employed by the famous, infamous as well as just plain old taxpayers with substantial income they want to shelter from their respective tax collectors.

"What's wrong with this? Why not shop around to get the best deal for yourself? Isn't capitalism driven by customers demanding the best deal for themselves? Well there's competition and there's competition. At its best, competition between companies trying to please the customer leads to better and cheaper products. But what we're dealing with here isn't competition between companies; it's competition between countries, fighting to undercut one another's tax rates. This kind of competition leads to nothing but bad consequences for the citizens of the world. Of course in the short term one country may increase its tax intake by undercutting the tax revenues of other countries, and so attracting businesses greedily wanting to pay as little tax as possible. But globally, and over time, tax competition inevitably leads to an ever dwindling percentage of profits going to governments to spend on health, education and public services. By 'shopping around' for the country with the best tax deal, U2 put pressure on countries to surrender more and more of their tax revenues to share holders.

This is not just about having a dig at Bono. It is crucial to get people thinking about the ethics of taxation, and the relationship between tax and development. So far, UK Uncut actions have been incredibly successful at getting tax dodging into the public consciousness as a moral issue. This action will spread awareness of the suffering tax dodging causes to the developing world."

The group acknowledges, however, that Bono is a prime target because of his well-publicized philanthropic efforts:

"Bono is publically known for being concerned with development. But tax issues are crucial to development. Christian Aid estimates that developing countries lose $160bn annually, more than the global aid budget, thanks to unscrupulous multinational companies dodging tax. If we want poor countries to become richer, we need to adopt an ethical approach to taxation. On the face of it, it doesn't seem that U2 are taking an ethical approach to taxation. They are not thinking: 'What's our fair share? What do we owe the country that funded our health and education growing up?' Rather, they're thinking: 'How can we pay as little tax as possible?' The poor will always be with us whilst such attitudes persist."

The other side of the argument is that by saving tax money Bono and those similarly situated will have more funds to spend on others who need help.

The question then comes down to who needs it more, the worldwide causes championed by Bono or the residents of England, Scotland and Ireland whose governments are getting less revenue for services because of wealthy residents' tax planning?

And that's an age-old issue that goes well beyond tax policy.