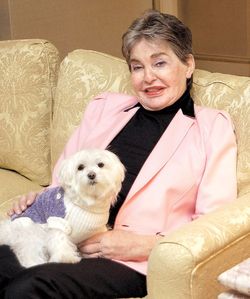 Trouble, the Maltese bequeathed $12 million when her rich owner Leona Helmsley died in 2007, has also passed away.

The pooch was 12 years old or, as the New York Daily News notes, 84 in dog years.

As you might recall, some of the wealthy hotelier's human relatives weren't happy about Trouble getting so much money.

After some court hearings, the pooch's $12 million gift was cut to $2 million.

That still was more than enough to provide, reports the News, for Trouble's annual expenses of $8,000 for grooming, $1,200 for food and for payments to the dog's caretaker and security guards. Yes, guards; apparently Trouble received death threats.

The pup was cremated and, said a spokesperson for the Helmsley estate, her remains are being privately retained.

And what about the remainder of the money left to Trouble?

The rest of the dog's inheritance has reverted to the Leona M. and Harry B. Helmsley Charitable Trust.

Taxes beyond Trouble: In addition to Trouble's tax connection via the Internal Revenue Code rules governing estates, the dog's owner had her own run-ins with the IRS.

Helmsley, who famously declared that paying taxes was only for the little people, found out the hard way that tax obligations also applied to her rich ilk. She served 18 months in federal prison on tax evasion charges in the early 1990s.

I had no idea that you could even leave your inheritance to a pet. We created a paw prints memorial plaque for our deceased dog, but she wasn't rich. http://www.petcremationnevada.com/s-1-about-us.aspx I bet Leona and Trouble are happy to be reunited again.