While doing some seemingly endless post-Tax Day clean-up, I realized I never posted info on the Executive Branch occupants' tax returns. So here's the deal.

Barack and Michelle O reported $1.7 million in adjusted gross income last year, down about 69 percent from the previous year's total of $5.5 million. 2010 also was the couple's lowest-earning year since 2006.

But with estimated tax payments and withholding, the First Couple last year paid $466,104 in taxes.

So just like the majority of all U.S. taxpayers, the Obamas' return netted them a tax refund. Of course, their $12,334 cash back from the IRS is a bit larger than most folks receive.

About those estimated taxes: The Obamas used the annualized income installment method to reduce any estimated tax underpayment penalty.

It's a more tedious filing option, but it's a good choice if your income that isn't subject to wihholding fluctuates throughout the year. That was the case for the prez, since most of his 1040-ES income was from book sales, which are hard to predict.

Opting to itemized: The Obamas broke rank with the majority of taxpayers in that they itemized while most filers claim the standard deduction.

Part of the reason the Obamas filed Schedule A is that they gave a lot to charity. Their $373,289 in total itemized deductions included $245,075 to the following nonprofit organizations: 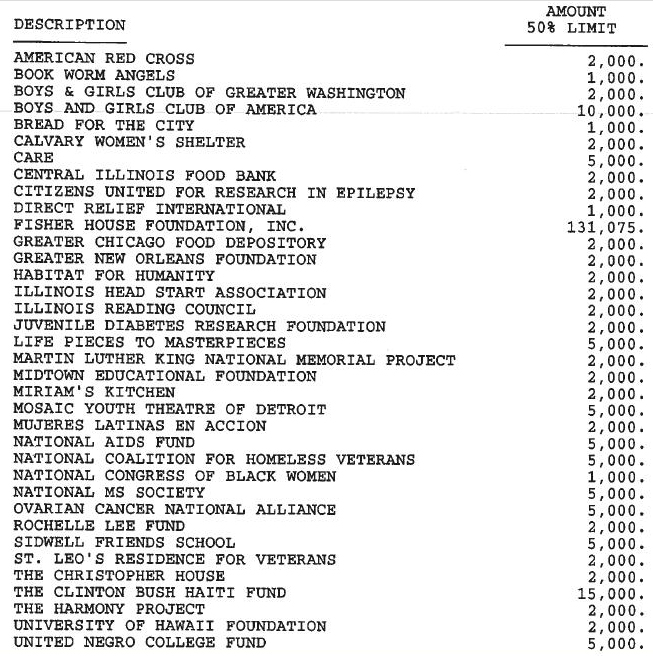 But the First Couple wasn't able to use miscellaneous claims because they didn't exceed the 2 percent of income threshold.

Other tax forms the Obamas filed for 2010 included Schedule B reporting interest and dividends; Schedule C for profit or loss from a business; Schedule D detailing capital gains or losses; Schedule E for supplemental income and loss (book royalties); and Schedule SE to pay self employment tax of $37,036.

Like ever opther taxpayer with self-employment income, the prez got to claim half of his self-employment tax payment as an above-the-line deduction to reduce his gross income.

Obama also contributed to a self-employment retirement plan that provided him not only a nest egg but also another above-the-line deduction of $49,000.

But unlike the Obamas, VP and Mrs. Biden had to write a check to the U.S. Treasury in the amount of $7,180 to cover what they owed Uncle Sam.