News coverage of late is full of stories of state lawmakers confronting taxpayers over ways to close huge budget deficits.

Most of the attention in state capitals lately has been on cutting services and, as evidenced by the daily videos of teacher protests in Madison, Wisc., public service payrolls.

But maybe taxpayers in every state need to think about paying more taxes.

Go ahead. Send you scathing comments and e-mails my way. But hear me out first.

The Tax Foundation says that combined state and local tax burdens fell slightly in fiscal year 2009. It's the first drop in the state tax burden since 2000.

For each state, the Washington, D.C.-based nonpartisan organization calcu­lates the total amount paid by state residents in taxes, then divides those taxes by the state's total income to compute a "tax burden." The calculation is based not only on the most recent year's data, but also on earlier years because official tax and income data are periodically revised.

The methodology provides the answer to the question, "What percentage of their income are the residents of this state paying in state and local taxes?"

The answers for each state are shown in the map below. You can click the image to get a slightly larger view, or check out page 4 of the study (PDF format) for an even bigger view, as well as a table version on page 3. 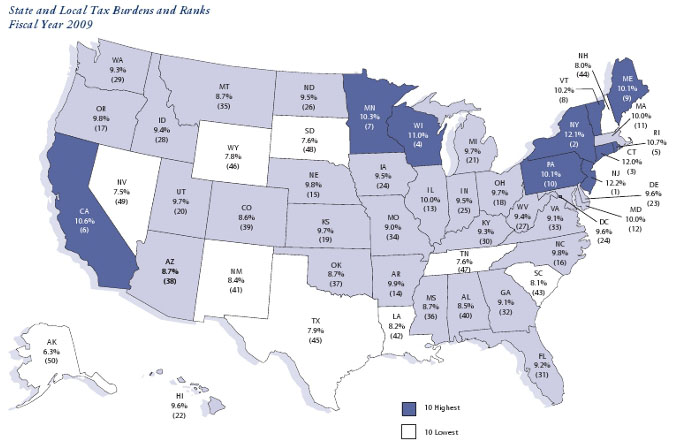 They're the only three states where taxpayers give up 12 percent or more of their income in state and local taxes. That's a full percentage point above the next highest state, Wisconsin.

Rhode Island, California, Minnesota, Vermont, Maine and Pennsylvania round out the top 10.

Alaska is at the other end of the tax burden scale. Alaskans are consistently the least taxed in the nation and that held true in 2009, when Last Frontier residents paid just 6.3 percent of their income in state and local taxes.

The next lowest state, over a full percentage point higher, is Nevada at 7.5 percent.

In five states -- Nevada, South Dakota, Tennessee, Wyoming and Texas -- the residents pay between 7 and 8 percent of their income in state-local taxes. Four other states round out the bottom 10: New Hampshire, South Carolina, Louisiana and New Mexico.

Economic impact: Part of the reason that the 2009 state tax burdens were less can be attributed to the slow economy.

"The 2009 fiscal year was a tough one for states and for taxpayers," said study author Mark Robyn, staff economist at the Tax Foundation.

Still, state and local taxes remain down substantially from the national average of 10.4 percent in 1977, the first year the study was published.

Depending on others for taxes: Another reason for a drop in state's tax burdens on residents, says the Tax Foundation, is that most states try to "export" their taxes, or collect from non-residents.

Economists have been studying this phenom­enon since at least the 1960s when Charles McLure (1967) estimated that states were extracting between 15 and 35 percent of their tax revenue from non-residents.

In recent years, many states have made a conscious, and now accelerating, effort to raise taxes on non-residents. Many tax-hike campaigns in the last several years have explicitly advertised the preponderance of non-voting, non-resident taxpayers as a reason for resident voters to accept the tax.

Administratively, states also have tended to go after non-resident tax revenue more aggressively than they do with residents. A good example of that is playing out now in New York, where city tax officials are going after folks who own property in the Big Apple.

Tax trade-offs: OK. So you still aren't convinced that a larger tax burden will help your state cover its budget gap. Fine. That's between you and your elected officials.

But just remember, at every governmental level, be it state, local or federal, the fiscal rules are the same as in your personal household. When you can't afford to pay for something, you'd better be prepared to give it up.

That's apparently a concept that's not sinking in here in my home state.

"We really want to slash the budget, but not anything in it," says pollster Daron Shaw, a professor of government at the University of Texas-Austin. That was the key finding when the school joined with the Texas Tribune to find out how Texans think the state should deal with its budget crunch.

The poll found that most Texas voters believe that lawmakers should solve the state's massive shortfall by cutting the budget, but their enthusiasm for cuts fell dramatically when asked about reductions in specific programs.

So if you want to keep your tax burden low, start thinking long and a bit harder than my fellow Texans are about just what you want your government officials to eliminate … or not.

And be prepared that you might lose something you personally now enjoy, benefit from and depend on in exchange for less taxes.