Super Bowl XLV started out like it would be a Green Bay Packers rout of the Pittsburgh Steelers, but it actually turned out to be an exciting game.

As a life-long Dallas Cowboys fan I don't have a lot of love for either team that made to this year's big game. Both have handed the 'Boys some bitter losses over the years.

But since sporting events are more fun when you have a rooting interest, I cheered for the Packers for several reasons.

First, there were the quarterbacks. Aaron Rodgers has handled his ascension to a team leadership role gracefully, proving that Packers' management made the right move. Now it's time for the sports world to forget about the previous Green Bay quarterback, please! And as for the Steelers' QB, let's just say that losing the big game couldn't have happened to a more deserving guy.

There also was a personal connection. When the hubby was a young lad visiting his grandparents up north, he got a tour of Lambeau Field and even met Bart Starr. 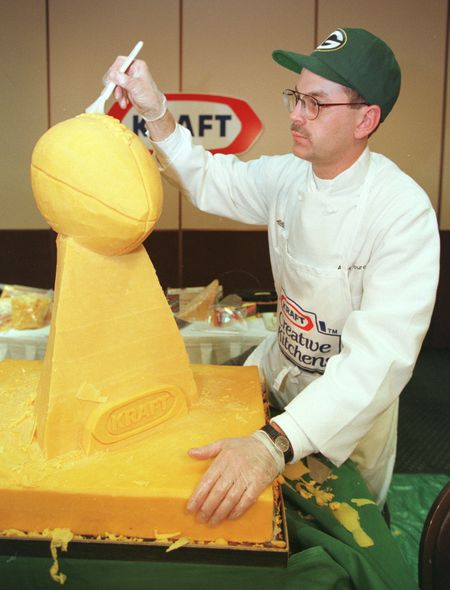 Then there's the photo above of Kraft Foods' cheese sculptor Allen Hendricks putting the finishing touches on a replica of the Lombardi Super Bowl Trophy carved from a 600-pound block of Wisconsin cheddar cheese. It's an old picture, taken back in 1998, but it is just too perfect and I was hoping Green Bay would win so I could use it.

So I was pleased for many reasons with the game's outcome. Good job Packers and enjoy your championship Cheeseheads!

Report your winning bets: A lot of people decide which team to cheer for based on how much money they have riding on the game.

Remember, your gambling winnings, from Super Bowl XLV or any other bets, are taxable income. Be sure you let the IRS know how much you made from your wagers when you file your 2011 return next year.

As a diehard Steelers fan, I got to give Green Bay credit, they played a great game and deserved the win.

However, I think the Steelers would of won the game if it wasn't for the Mendenhall fumble. That swayed the momentum Green Bay's way who did not do much in the 2nd half up until that point.

The Steelers will be back in the Super Bowl soon. Ben is a great QB who is bound to win 3 SB's or more.

While being a true Pittsburgh fan, I'd have to say they really didn't play all that well. Better luck next time guys.