January is a busy month at the IRS because most people get tax refunds and they file early to get their money ASAP.

The IRS has for years been pushing direct deposit of refunds and those efforts have paid off. Last year, 68 percent of taxpayers had their refunds sent straight to a bank account.

But not everybody who gets a refund has a bank account; the buzzword is "unbanked." So Uncle Sam has come up with a plan this filing season for them. Treasury will send 600,000 low- and moderate-income unbanked taxpayers their refunds via a special prepaid debit card. 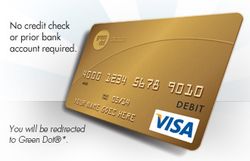 The MyAccountCard Visa Prepaid Debit Card got good reviews from the consumer advocacy groups. To be honest, I was a bit surprised by that, since some of the cards issued this filing season will include fees.

Those fees caught the eyes of other folks, too, including Congress. And a couple of lawmakers want an explanation.

Ways and Means Chairman Dave Camp (R-Mich.) and Oversight Subcommittee Chairman Charles Boustany (R-La.) have asked Treasury Secretary Timothy Geithner for more details on the program, including how recipients of the pilot program were chosen and an explanation of all of the fees and charges that will be incurred by some of taxpayers enrolled in the pilot program.

In a letter to the Treasury Secretary, the Representatives said they are concerned about general oversight of the program:

If the goal of the Treasury Department is to "provide a safer, faster and more convenient way to receive a federal tax refund as well as other regular income," it is important that these cards provide adequate consumer protections.

Camp and Boustany also are worried that this debit card refund plan could lead to expanded government efforts that they believe are best served by the private sector:

We are also concerned about "mission creep." The program appears to have begun as a narrowly crafted solution to a narrow problem: reducing the number of paper checks by getting tax refunds in the hands of those who may not have bank accounts. However, from Deputy Secretary Wolin's comments, the program seems to now have morphed into an effort to establish ongoing bank accounts for low-income taxpayers. Since the financial services industry is already competitive (with banks and credit unions actively pursuing new account holders), we question the wisdom of the Federal Government becoming so involved in the financial affairs of individual taxpayers.

The Ways and Means members asked Geithner for answers and additional information in 10 areas of the tax refund debit card pilot program:

The Congressmen want the answers by next week; specifically, no later than Feb. 3.

Don't worry. Although I'm just now getting around to blogging this (it's been a crazy tax week!), their letter went to Treasury on Jan. 20 so Geithner and crew have had some time to work on answering the Congressmen's questions.

Next week, we'll see if the response is satisfactory.

Good question! thanks for jogging my memory. I'll do some checking.

Kay,
Do you know whether the Treasury has responded to the letter?

Simpler and cheaper. Cheaper is the key word here.

Very interesting that they are trying to get away from paper checks. Is it just simpler for their systems to stay with electronic payment options?