Paychecks must have come out (although we're still waiting on hubby's) last week since I'm hearing a lot of grumbling about how the highly touted 2 percent payroll tax cut is not working.

Some companies may not have yet instituted the new payroll tax tables to take the reduction from 6.2 percent to 4.2 percent in employees' withholding. This is the portion that goes toward Social Security and will apply to up to $106,800 of income made by all workers.

But the unfortunate fact of the matter is that folks who make well less than the six-digit wage base cutoff aren't likely to get anything from the payroll tax cut. In fact, some will see less, not more, in their paychecks this year.

The problem, as I discuss in payroll tax losers, is that we have a converging of the old Making Work Pay tax credit, which was in effect through 2010 and which will be claimed on tax returns filed this year, and the new payroll tax cut.

That now-expired credit provided most workers with $400 or $800 if they were married and filed a joint return. The new payroll tax cut won't get to the $400 level for a worker until he or she makes $20,000 or more.

That means, according to numbers crunching by the Tax Policy Center, that almost 51 million taxpayers will see their taxes go up in 2011.  And most of those folks make less than $35,000.

Low-income workers are the only income group that will lose income this year compared to 2010 under the recently enacted Tax Relief, Unemployment Insurance Reauthorization, and Job Creation Act of 2010, notes the Center for Economic and Policy Research (CEPR). Other groups, says the Washington, D.C.-based nonprofit, will receive a bigger tax cut in 2011 than in 2010.

CEPR has put the Tax Policy Center calculations into a graphic for easier illustration: 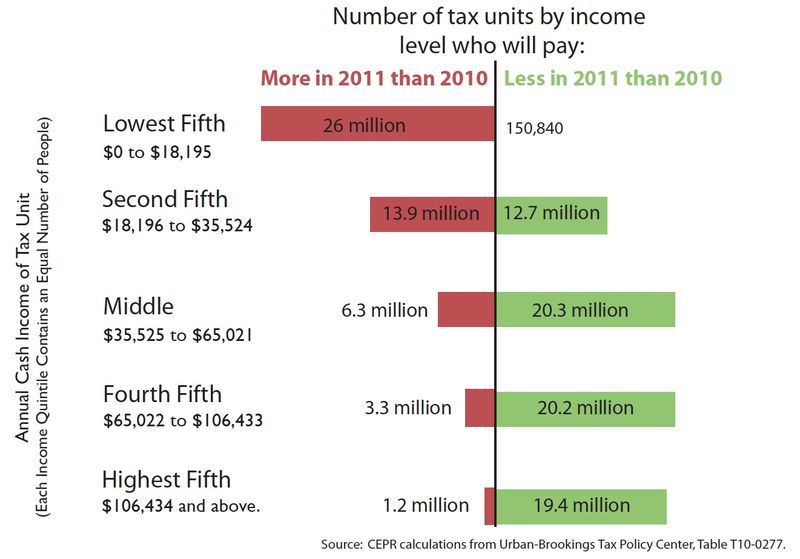 Click the image (or here) for a larger view of the graphic.

But whether in text or images, the bottom line is that this year some folks will not get the tax savings that others will.

When the bean counters did the math, this probably worked well, given that back then they were operating under pay-as-you-go and had to find some tax money to offset new or continued taxes.

But judging by just who the tax cut losers are, I'm pretty sure this is not exactly what Obama had planned when he agreed to the tax deal.

And I suspect the Administration, at least from a political perspective, will be glad to see this temporary payroll tax cut end on Dec. 31.