Mark your calendars, fellow taxpayers. 2011 is an interesting year when it come to filing dates.

The most notable tax timing issue primarily affects folks who itemize using Schedule A. The IRS says these taxpayers, as well as those who claim some specific deductions -- tuition and fees and educator expenses claimed directly on Form 1040 or 1040A -- will have to wait until mid- to late February to file.

Yes, this year the IRS is imitating a cable TV technician, giving us taxpayers a vague, open-ended time frame in which to cool our heels while we wail for service.

But it's not all the IRS' fault. In fact, it's mostly Congress' fault.

The IRS has to wait until laws are firmed up before it can program its computers. If it jumps the gun and the laws change, then the delay to undo/redo the programming will be longer.

So, like us taxpayers, the IRS has to wait for the House and Senate to act. And since lawmakers took until mid-December to reinstitute several expired 2010 tax year provisions, the IRS didn't get to start its work in time to be completely ready for the start of the 2011 filing season.

Who has to wait? The good new is that most taxpayers won't be affected by the filing season delay since most folks don't itemize.

The IRS estimates that about 50 million taxpayers will have to wait to file this year.

Even then, a lot of those folks won't file early anyway. Last year, only about 9 million of the 140 million filers sent in their 1040s in January or February. 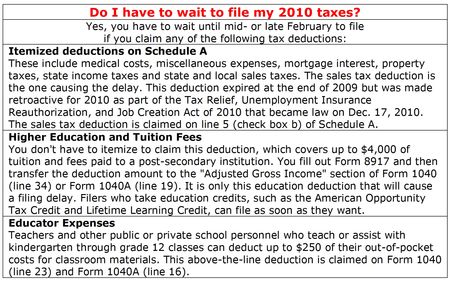 IRS Commissioner Douglas Shulman says his IT folks are working as fast as they can to get everyone on the filing track. Updated info, including revised state and local sales tax tables and pertinent forms, will be posted on IRS.gov as soon as they are ready.

In the meantime, Shulman suggests filers who are itemizing (that includes the hubby and me) and/or are claiming the other above-the-line deductions (i.e., those claimed directly on the 1040 or 1040A) go ahead and start working on our taxes.

But the commish wants us to hold off sending in our affected returns until the IRS systems are ready to process them.

Exactly what that date is will be announced by the IRS as soon as it comes up with it!

Software options: If you are in the delayed filing category but are using tax software, you might be able to go ahead and file early.

TurboTax says it will hold affected returns until the IRS begins accepting them and then will send customers e-mail confirmation that their returns have been e-filed and accepted by the IRS.

If you use another tax software, check with that manufacturer to see if it is offering the same option.

Later April filing deadline for all: Most taxpayers won't be affected by the delay in the start of the 2011 filing season since most taxpayers don't itemize.

But another deadline of note this year does affect everyone. It's the drop-dead date for getting your return to the IRS.

That final filing day usually is April 15, except when it falls on a weekend or federal holiday.

This year, April 15 is a Friday. But it's also Emancipation Day. While this day is not a federal holiday, it is a holiday in Washington, D.C.

And since the IRS headquarters is in D.C. … well, you get the idea.

The bottom line is everyone gets until the next business day, Monday, April 18, to file 2010 tax returns.

That's three extra fun-filled days -- including a weekend during which we can work on our taxes! -- to get our 2010 returns to the IRS.

File early, file later: OK, we've covered the middle dates noted in this post's headline. What's the deal with the days that bookend them?

Friday, Jan. 14 is the day that the IRS starts accepting electronically filed returns, unless, of course, you have to wait because of some of your deductions.

That day also will kick off the annual Free File service. This season, taxpayers who have 2010 adjsted gross income of $58,000 or less can use the IRS-software manufacturer partnership site to prepare their returns and e-file them at, as the name says, for free.

As for those folks who insist on putting off filing until the very last minute, they also get a couple more days.

The usual extension deadline Oct. 15 except when -- wait for it -- that day falls on a weekend or holiday.

Remember, this six extra months applies only to the filing of your tax paperwork. When you file (by April 18 this year) for an extension, you must then pay a good estimate of any taxes you expect are due.

Don't forget your state taxes: If your state filing deadline is usually April 15, you should check with your state's tax office about this year's due date.

New Jersey, for example, has decided to follow the federal filing date example.

Robert D Flach, whom many of you know as The Wandering Tax Pro, tells us via his New Jersey Tax Practice Blog that "the New Jersey Division of Taxation has properly decided to tie in the 2011 initial due date for filing the 2010 NJ-1040, and paying any tax due, with the extended federal deadline."

It will be interesting to see how many other states join the IRS and Garden State in pushing their filing deadlines to April 18.

The IRS accepted my federal taxes on Feb 14 but I still have to wait another 2wks for my return. Will there be other deposit days other than Fri. since we had this delay?

IF I HAVE TO WAIT TO FILE MY TAXES BECAUSE OF THE DELAY, WILL THAT AFFECT WHEN I GET MY STATE TAXES.