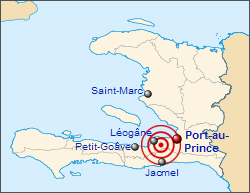 A year ago today, a horrified world watched as Haitians struggled to survive a massive 7.0 earthquake.

In the following days, there was a massive outpouring of assistance. Charitable donations flowed into relief groups. The concern led to the creation of a new way to give, the texting of charitable gifts.

Since the earthquake occurred so early in 2010, taxpayers were given the option to deduct their charitable gifts to earthquake relief efforts on their 2009 tax returns filed last year.

This temporary tax law change was similar to the deduction time shifting option offered following the Indian Ocean tsunami that occurred on Dec. 26, 2004. Back then, individuals who contributed to tidal wave recovery efforts in early 2005 were allowed to claim the deduction on their 2004 tax returns.

The idea in both instances was that the possibility of deducting a donation might encourage more donations.

I don't know that the option really mattered in either case. You have to itemize to deduct charitable donations and most people don't itemize.

Plus, when a devastating disaster strikes, people act from their hearts, giving little if any thought to possible tax implications.

Still, the gesture was nice.

But this filing season, don't get tripped up by last year's donation shift law. If you do itemize and you did give to Haitian relief efforts last year, double check your 2009 tax year records.

Some people may have made a tax-deductible gift during the specified January-February 2010 time frame but decided the write-off would be more tax valuable as a deduction for the 2010 tax year. If that's you, be sure to claim it this year.

If, however, you made a cash contribution to Haitian earthquake relief efforts between Jan. 12 and Feb. 28, 2010, and you deducted that amount on your 2009 return last year, be sure you don't deduct it again on your 2010 return.

Great source! I love helping people who are unfortunate. Donating clothes, foods and even car is big help for them.