I feel really bad for the co-chairmen of The National Commission on Fiscal Responsibility and Reform. You probably know this as the deficit panel, a bipartisan group of Washington bigwigs tasked by Obama to come up with a way to get the country's spending under control.

Erskine Bowles, a former Democratic White House (Bill Clinton) chief of staff, and Alan Simpson, a former Republican Senator from Wyoming, headed the effort. By all reports, they seemed to take the job seriously and wanted to come up with suggestions to help right the country's fiscal ship.

But what they primarily got was lots of criticism, both last month when they shared their draft plan and this this week with the release of the full, but revised, panel report entitled The Moment of Truth.

Obama, who appointed the panel, and Bowles and Simpson had hoped that the proposals would be a starting point for Congress to examine overhaul of our current convoluted tax system.

While some of the ideas might eventually show up in separate pieces of legislation or amendments to other bills in the upcoming 112th Congress (and beyond), the full report itself is dead on arrival.

Congressional qualms: The deal was that House Speaker Nancy Pelosi (D-Calif.) and Senate Majority Leader Harry Reid (D-Nev.) would bring the deficit recommendations up for a floor vote, but only if the proposal got the support of a supermajority of its members. That meant that 14 of the 18 panelists had to sign off on the report.

The main reason for the defeat was that there were too many sitting Members of Congress on the commission. And we all know how loath those folks are to take a controversial stand.

Of course, it's notable that Spratt, the only House member to agree with the report's findings, also is not coming back to D.C. in January as a member of Congress. The exiting chairman of the House Budget Committee lost his reelection bid in November.

I pick on Congress for being wussy when it comes to tough questions. They usually deserve the periodic verbal slappings.

But part of elected officials' hesitancy to take unpopular stances comes back to the people who put them in office.

As I note in my Bankrate Taxes Blog discussion of the deficit panel's final proposals, before lawmakers will agree to any of these tax changes, they have to be sure that taxpayers (aka voters) are on board, too.

And we're not quite there yet.

Devil in the tax details: Yes, everyone complains about taxes. We carp about how the tax code is out of control, so complicated that it requires many of us pay a tax professional to fill out our 1040s each year.

But we still love a lot of those complicated tax breaks.

We have, in essence, reached a sort of rapprochement with the tax code. We can deal with it as long as it has the tax breaks that apply to us personally.

That's not what the deficit panel wanted to do. Its first choice was what it called the Zero Plan, under which it would get rid of all tax expenditures. Tax expenditures are losses to the U.S. Treasury from certain tax deductions, exemptions or credits to specific categories of taxpayers.

Without all those tax expenditures, the deficit panel said U.S. income tax brackets could be cut from the current six (or five if the Bush tax cuts expire) to just three: 8 percent, 14 percent and 23 percent.

But knowing that Congress, lobbyists and taxpayers would never let go of some tax breaks (can you say mortgage interest?), the panel offered another option.

Its so-called Illustrative Individual Tax Reform Plan would keep some tax breaks. But that would mean that income tax rates would go up a bit, to 12 percent, 22 percent and 28 percent.

The table below, from page 31 of the report, offers details on the Illustrative Plan. Click the image (or here) for a larger view. 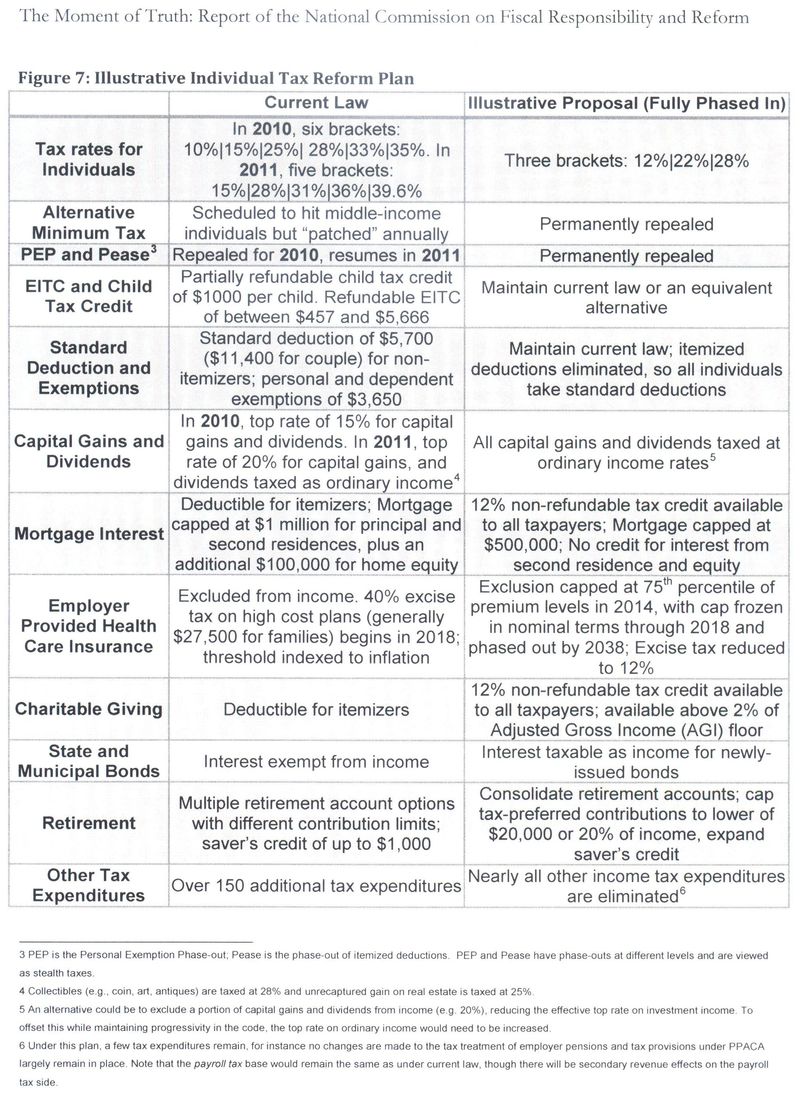 Would either the panel's no-tax-breaks Zero Plan or some-tax-breaks Illustrative Plan work for you? If so, you need to let your Senators and Representative know.

If enough of us are willing to give up tax breaks for lower rates and more money for the country, great! Then elected officials will find the personal and professional wherewithal to make the legislative changes to accomplish that goal.

But as long as we let Congress off the hook, they'll keep giving us the kind of government that we, by our votes, apparently deserve.

And we all know how loathe those folks are to take a controversial stand.
Loathe = hate
Loath = reluctant