Tax initiatives on many ballots

Today is a big day for folks wanting to work in the U.S. House or Senate. But today's election results also could change some state tax laws. Sales and property taxes are targets, as are the rich and marijuana smokers.

Around 160 ballot questions have been certified in 37 states. And while social issues are always popular topics to take directly to the electorate, Ballotpedia says that fiscal policy dominates today's initiative scene.

In fact, fiscal-related ballot measures this election year are up about 13 percent over the number of such measures that went to voters in 2008.

The "Big 5" topics on 2010 ballots, according to Ballotpedia, are taxes, administration of government, elections and campaigns, bond issues and state budgets.

Ballotwatch, a program of the Initiative and Referendum Institute of at the Gould School of Law at the University of Southern California, also has been tracking initiatives. So has the National Conference of State Legislatures.

Major tax questions nationwide: A lot of attention is focused on the Pacific Northwest, where voters could approve Washington state's first-ever income tax.

Actually, it wouldn't be a broad-based income tax; rather, it would be a millionaires' tax, collecting from the Evergreen State's wealthiest folk. Lower-income voters are being tempted to tax their rich brethren by the initiative's associated promise of a 20 percent reduction in real estate taxes, which every property owner hates.

Across the country, voters in Massachusetts are being asked to eliminate the state's 6.5 percent sales tax collection on certain alcoholic beverages.

Colorado voters are being asked to to approve three ballot measures that would cut school district property taxes (Amendment 60), would limit the ability of the state of Colorado and local governments to borrow money (Amendment 61) and would gradually reduce over several years Colorado's state income tax rate from its current 4.63 percent to 3.5 percent (Proposition 101).

All eyes on the Golden State: And we're all watching the Left Coast and its marijuana vote.

Yes, the California vote does have a tax component, but most of us in the other 49 states and D.C. are wondering if the Golden State will finally pull the trigger and legalize the wacky weed.

If approved on Nov. 2, California's Proposition 19 would take effect the next day, legalizing various marijuana-related activities and letting local governments regulate them and collect associated fees and taxes.

But the state that popularized taxing-by-ballot with Proposition 13 more than 30 years ago also is now asking California to redefine some terms.

Today's Prop 26 would reclassify certain California state fees as taxes, most notably those on companies that produce pollution. Currently, fees are voted on differently than taxes; California's legislature requires a super-majority to vote to approve taxes, while only a simple majority is required to approve fees.

Some other key tax initiative votes today will be cast in: 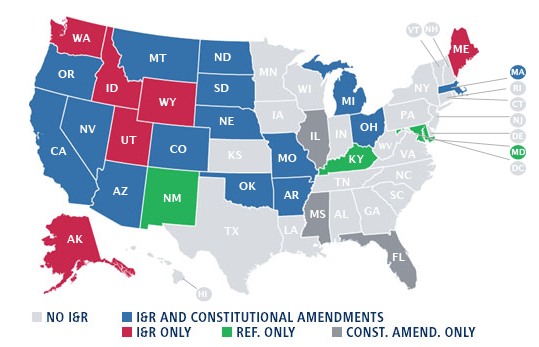 This image from Citizens in Charge gives you an idea
of which state ballots contain initiatives this Election Day.
To get details on the measures, click here.

Remember: Your vote could make a big difference in your state tax laws.