AMC is on a roll.

Don Draper and his fellow Mad Men are heading into their fifth season of making the 1960s sexy.

And now The Walking Dead is taking a shuffling, creepy walk all the way to the bank.

In case you don't have cable, the latest AMC program is a live (OK, filmed) version of what I'm told is a popular comic book series about zombies. 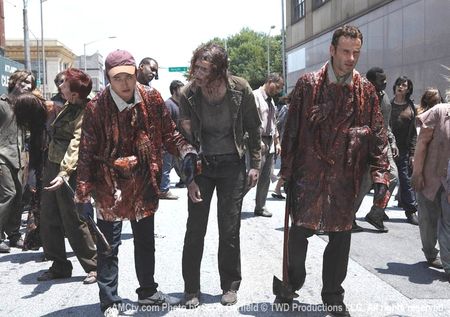 I'm unfamiliar with the graphic novels by Robert Kirkman, but I am a sucker for horror stories in any medium so I watched its Halloween night premiere. So did 5.3 million others. That represented the largest audience ever in the preferred TV viewer demographic for a scripted series show on cable.

Another 4.8 million of us tuned in for the following episode. I taped tonight's third show and will watch it after the hubby goes to bed; he's not a zombie fan.

Unfortunately, all this gory love of innards-craving undead doomed Rubicon, another AMC show I also liked.

Viewers, timing and tax breaks: Rubicon's demise wasn't, of course, as simple as ratings, although The Walking Dead is bringing more than four times the eyeballs to TV sets than tuned in to the neo-noir conspiracy thriller.

The New York Times examines what went right for zombies and wrong for secretive political analysts.

The Walking Dead also has entertainment industry tax breaks on its side. The Times notes:

The episodes were filmed almost entirely on location in and around Atlanta, where a roughly 30 percent tax credit cut down costs. AMC declined to comment on the show's budget, but two people with knowledge of the production said each episode cost $2 million to $2.5 million, a price that puts it in line with other high-end dramas on cable, though still below the equivalent prices on broadcast television.

So while I'm sorry that I won't get to see the further machinations of Truxton Spangler or find out exactly what angle Kale Ingram was playing, I'm grateful for the Rubicon episodes that did air. I also appreciate that the show's lone season didn't end in a total cliffhanger.