Not only did we Americans invent Thanksgiving, we have in our excessive way made it a truly gigantic holiday.

At its core, the fourth Thursday in November hearkens back to our country's beginnings. The first celebration was in 1621 to commemorate the Plymouth Colony's good harvest following a harsh winter. Local Wampanoag tribe members were invited and the tradition of sharing a meal and thanks was born.

The holiday was made official in 1789 by President George Washington. By 1956, Thanksgiving was observed in every U.S. state.

Overeat up! Thanksgiving has become probably the single most fattening day in our nation.

Although the turkey, which is the main dish for most of us -- nearly 50 million are roasted on this November day alone each year -- is generally lower in fat and cholesterol (the white meat, at least) than most other meats, we make up for the healthy main course with lots of calorie filled side dishes and desserts.

And most of us tend to eat constantly throughout the day.

Except for those who can't afford a Thanksgiving dinner, or any other regular meal for that matter, during the other 364 days of the year.

Hunger in a land of excess: Share Our Strength, a national nonprofit organization aimed at ending childhood hunger, notes that 50.1 million Americans aren't able to regularly put enough nutritious food on the table.

In addition, food insecurity, which includes "running out of food without money to buy more, cutting portion sizes or skipping meals, and not feeding children in the family because there isn't money for food," exists in almost 15 percent households across the United States.

And it's not just the folks whom are considered poor who are hungry. Almost 70 percent of food insecure families live above the poverty line, according to Share Our Strength.

Share your bounty: Now I'm not trying to bring you down as you get ready to spend some quality time with family and friends and are preparing your annual Turkey Day repast.

But as you're giving thanks for all you've got, it might be nice to spare a thought or two for those who aren't as blessed.

And today or any other day you have time, consider giving to a nonprofit that helps families fill their pantries during the holiday season and year round.

Every city has a food bank. Most have programs to deliver meals to shut-ins. Every community has churches that provide groceries and/or meals to those who otherwise would go hungry, on holidays and routine days. 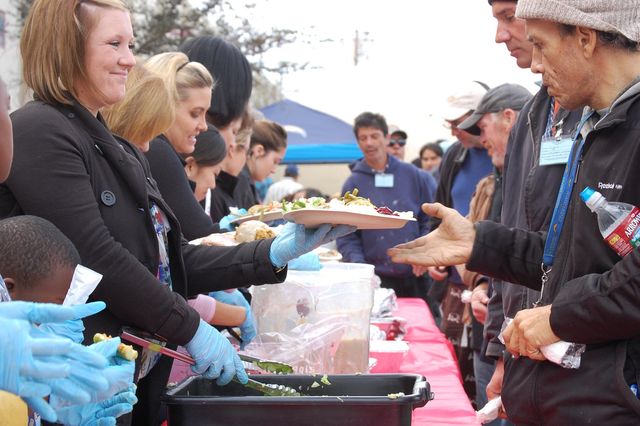 There also are the national groups, such as Share Our Strength and Feeding America (formerly known as Second Harvest) and Goodwill and Salvation Army that offer help, food and more, to the needy.

In this season of celebrating what so many of us have, sharing some of our bounty would truly be in the spirit of our first Thanksgiving.

And remember, even though it's not the reason to give, you also might be able to get a tax deduction for your generosity.