As soon as people got through chewing up and spitting out the debt reduction panel's suggested changes to Social Security, they turned to its next controversial recommendation: reducing tax breaks for homeowners.

Blogs and traditional news media are abuzz about proposals by the chairmen of the National Commission on Fiscal Responsibility and Reform to tweak mortgage-related tax benefits. Most headlines scream some version of "death imminent for the mortgage interest deduction."

That is indeed one option in the draft report (actually a 50-page PowerPoint presentation) released last week by commission co-chairs Erskine Bowles, former chief of staff in the Clinton White House (at far left in the photo below), and Alan Simpson (right), former Republican Senator from Wyoming. 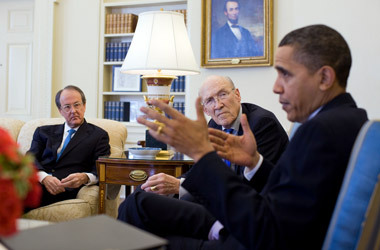 But the media focus has been a bit hyperbolic.

Taxes, the deficit and reality: Elimination of the mortgage interest write-off, as well as most other tax deductions, would allow for a dramatic drop in individual income tax rates under the chairmen's Zero Plan.

Without having to make up for myriad tax expenditures, the Zero Plan would create just three personal income tax brackets of 8 percent, 14 percent and 23 percent.

That, of course, won't happen. So the commission chairmen offer scenarios where at least some form of the mortgage interest deduction remains.

They also kick around a second option, fashioned after the tax reform plan introduced earlier this year by Sen. Ron Wyden (D-Ore.) and Sen. Judd Gregg (R-N.H.), that calls for limits to the mortgage deduction.

Under the Wyden-Gregg plan, the write-off would be limited to interest on mortgages for primary residences. There wouldn't be any Schedule A claims for loans on second homes or home equity loans.

And that remaining home loan interest deduction would be allowed only for mortgages of $500,000 or less.

The loan cap would mean that the tax code -- that is, all us taxpayers -- wouldn't be subsidizing suburban McMansions that so many buyers opt for because, in part, they now can deduct interest on home loans of up to $1 million.

A touchy tax break subject: All of the proposals in the draft debt report are great starting points for a long-overdue discussion of the constantly growing list of tax breaks and the need for real tax reform.

The home mortgage deduction in particular needs to be reconsidered. I'll be the first to admit that it's provided the hubby and me lots of tax saving over the years. We're in our fifth house and also refinanced a couple of times, happily writing off all those mortgage loans' interest each April.

But this tax break, which is claimed by only about a quarter of taxpayers, is incredibly expensive. The New York Times notes that the mortgage interest deduction will cost the U.S. Treasury $131 billion in forgone revenue in 2012.

Again, because homeownership is such an emotional -- and heavily lobbied -- issue, the deduction won't be eliminated, even though homeowners in other countries (Australia, Canada) seem to get by just fine without it.

But capping the size of mortgages on which interest can be deducted is a reasonable first step.

Previous mortgage tax break proposal ignored: I suspect, however, that the draft report (or the final full one due to Congress by Dec. 1 if enough commission members agree to its content) will be for naught.

The prior Administration's advisory board, also a bipartisan collection of respected fiscal and political types, suggested back in November 2005 that we replace the mortgage interest deduction with a tax credit equal to 15 percent of interest paid on a principal residence.

As a credit, the amount would be subtracted directly from any tax liability. And itemizing wouldn't be necessary to claim it, making things easier for filers, too.

None of that mattered. In fact, the audacity to target the mortgage interest deduction doomed that previous panel's report, which was never heard from again.

Maybe the debt commission's tax suggestions will get some serious consideration.

Maybe the new blood on Capitol Hill will help kick-start tough budget and tax talks and keep them going.

And maybe we voters will one day quit punishing lawmakers and candidates who tell us the hard truth about what it takes for a government to live within its means. That it requires not just program cuts, but taxes to pay for what's left.

I always viewed the mortgage interest deduction as a sacred cow item. When we bought our house, the first year interest was nearly $37,000. The tax deduction was a $10,000 savings that was part of our budget. We've paid it down to less than half its original balance, at a lower rate, so our interest cost is now just under $10,000. $2,800 per year (in savings from the deduction) is nothing to sneeze at, but 15 years ago had it been pulled right after we bought the house, I'd be upset.
If they take it away, or cap it, you'll see an impact on the homes that are right at that margin. It just seems a bad time to make this kind of change.

As you said at the bottom, let's see what the new congress will be doing. That is about all we can hope for. Good article!